India's vice-captain Rohit Sharma went on to register his 29th ODI century and his first in 2020 when he scored a brilliant 119 off 128 balls. During his knock, he hit six sixes and eight fours. India skipper Virat Kohli once again showed that he is a true team man when his deputy Rohit Sharma lofted Josh Hazlewood straight back over his head for a six on Sunday during the third ODI against Australia in M. Chinnaswamy, Bengaluru.

It happened in the 32nd over of the match and Kohli was spotted pumping his fists after the 32-year-old India opener played the shot. Knowing well that the mid-on was in the circle he took the opportunity and went after Hazlewood and it came off well.

India’s vice-captain went on to register his 29th ODI century and his first in 2020 when he scored a brilliant 119 off 128 balls. During his knock, he hit six sixes and eight fours.

He also became the third quickest to breach the 9000-run mark in ODI.

Rohit took 217 innings to reach the milestone which is the third-best after India skipper Virat Kohli (194) and AB De Villiers (205). The 32-year-old pipped greats like Sourav Ganguly (228) and Sachin Tendulkar (235).

On the other hand, India skipper scored 89 off 91 balls and also bagged the Man of the match while his deputy was awarded the man of the match. The two also put on a 137-run stand for the second wicket which lay the platform for the Indian win.

Kohli became the fastest to 5000 runs as skipper. Kohli went past MS Dhoni, who reached the milestone in 127 innings while the current India skipper took merely 82 innings.

Former Australia skipper Ricky Ponting is third on the list having got there in 131 innings while South African Graeme Smith is fourth on 135.

Finally, India won the match by seven wickets with 15 balls to spare. 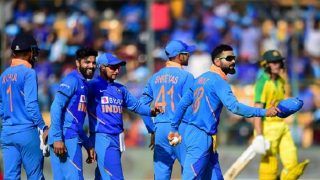 Nobody Can Say We Played An Inferior Australian Side: Ravi Shastri Takes a Dig at Critics