England have now jumped to the top of the ICC World Test Championships points table while India slipped to fourth.

England registered a comprehensive 227 runs win against India in the first Test at MA Chidambaram Stadium, Chennai to take a 1-0 lead in the four-match series. The visitors restricted India for just 192 runs in the massive 420 chase as left-arm offspinner Jack Leach claimed four wickets while veteran James Anderson picked three.

India witnessed a miserable batting collapse in the middle-order on Day 5 which led to a humiliating defeat. Skipper Virat Kohli fought hard with a 72-run knock but he didn’t get much support from the other players.

It is also England’s biggest Test win in terms of run-margin on Indian soil.

England have now jumped to the top of the ICC World Test Championships points table while India slipped to fourth. It will be an uphill task for the Indian team to seal their place in the final of WTC against New Zealand as they have to win two out of the next three games at any cost.

An all-round performance by the visitors has given them a 227-run victory over India.

Earlier, Shubman Gill resumed India’s innings from 39/1 on Day 5 with Cheteshwar Pujara, who failed to score big and got dismissed on just 15 adding just three runs to his overnight score.

However, Shubman continued to play with an aggressive approach and slammed his third Test fifty in the fourth match of his career. Unfortunately, the talented batsman once again failed to convert into a big score and dismissed on 50.

The veteran pacer with his typical in-swinger breached Shubman’s defence on the second ball of the over and destroyed the timber. Vice-captain Ajinkya Rahane replaced Gill in the middle but unfortunately, he also became the victim of Anderson’s peach of a delivery.

Rishabh Pant, who played an astonishing 91-run knock in the first innings, failed to score big on Day 5 and became Anderson’s third victim.

Washington Sundar also failed to emulate his performance from the first innings and departed on a duck.

After the middle-order collapse, Kohli shared a 54-run stand with Ravichandran Ashwin to put up a fight. However, Leach got the better of Ashwin to break the partnership and India’s hope.

However, Kohli’s wait for an international century continues as he was bowled by Ben Stokes on 72. While the tail failed to put up any fight to save the game.

The second Test of the four-match series will commence from February 13 at MA Chidambaram Stadium with 50 per cent capacity. 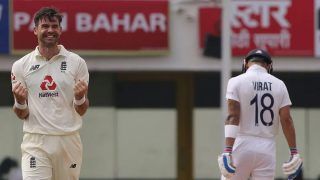 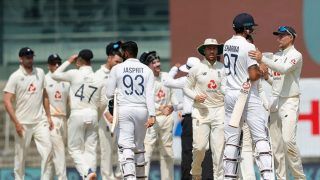