Three losses from their first seven group games have left the home side's semi-final prospects hanging in the balance ahead of Sunday's Edgbaston clash against an India team who have just replaced them on top of the world rankings.

Jos Buttler has dismissed the idea that England are losing their cool after two straight defeats put their World Cup future in grave jeopardy, saying “pressure is a privilege”.

Three losses from their first seven group games have left the home side’s semi-final prospects hanging in the balance ahead of Sunday’s Edgbaston clash against an India team who have just replaced them on top of the world rankings.

But Buttler played down the spat and said the mood in the camp was still positive.

“Naturally there’s some external pressure,” he said. “It would be naive to say we’ve got our blinkers on and we’re not aware of things that are going on outside.

“I think we just have to accept those things as what happens during tournament cricket.”

“You talk about pressures, external pressures, well pressure is a privilege sometimes,” he added. “We’re in a very privileged position to be in this situation.”

Bairstow’s first-choice opening partner Jason Roy enjoyed a long and seemingly pain-free net on Friday and looks increasingly likely to return to the team after three games out with a torn hamstring.

Roy, who smashed 153 from 121 balls against Bangladesh earlier in the tournament, has been badly missed at the top of the order and may even play if he is not 100 percent fit.

“He looks pretty good. I think he has been progressing nicely so it is nice to see him back in the nets, back in the group and taking part,” said Buttler.

“I’m sure the medical team will know more than I do but he looks pretty good. He has been a very important player for us a long time.

“We know we can perform better as a group and Jason is a fantastic player to have available. It would be a boost to have him play.”

Leading wicket-taker Jofra Archer could be a bigger concern. The paceman has been experiencing tightness in his left side and underwent a light training session, completing sprints and throwing drills but not appearing in the nets.

“He’s a pretty relaxed guy and sometimes doesn’t bowl,” said Buttler. “The medical team will be seeing how he goes. He’s working hard with the medical team and they’ll be keeping a close eye on him.” 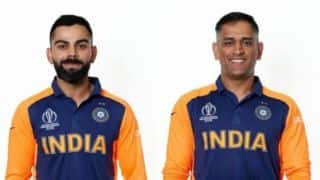