India's new era get off to a perfect start. 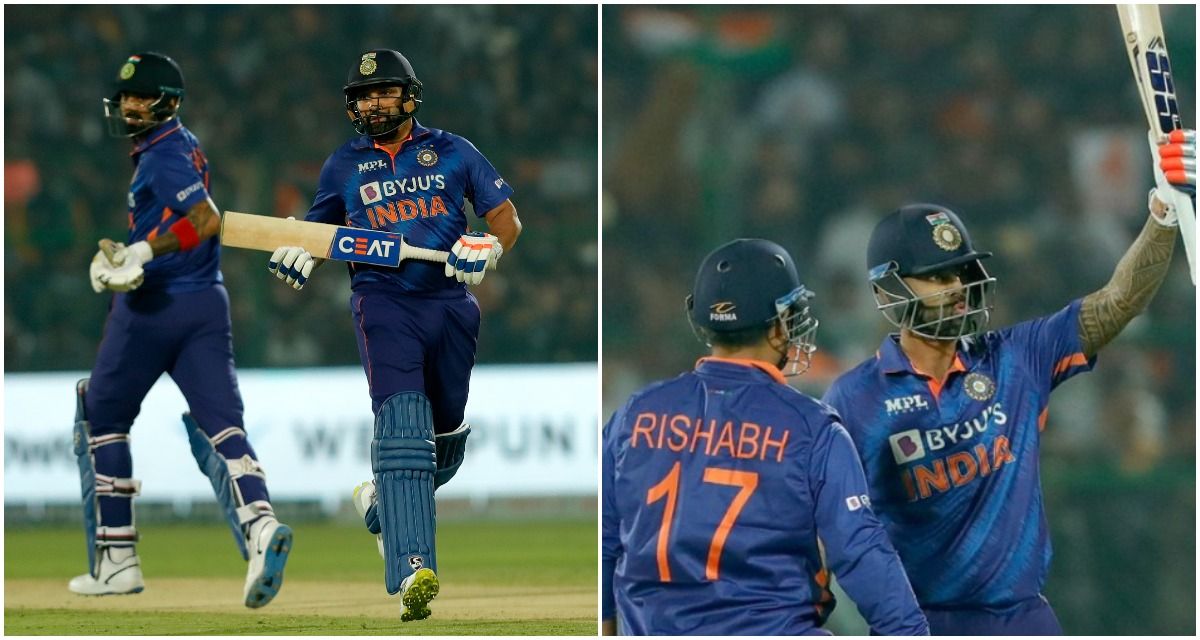 Jaipur, Nov 17: India’s new era got off to a perfect start, as Rahul Dravid’s men saw off New Zealand by 5 Wickets at the Sawai Mansingh Stadium in Jaipur on Wednesday. It was a much needed victory for the Men in Blue after a dismal T20 World Cup in UAE. Rohit Sharma will savour this win for a long time as it is his first win as T20 captain for the National team.

Suryakumar Yadav’s knock of 62 off 40 deliveries bagged him the Player of the Match as India take a 1-0 lead in the three match series. The home team was cantering to a comfortable win but messed up the chase in the final four overs. In the end, with New Zealand running out of bowling options, the job was done in the 20th over bowled by part-time pacer Daryl Mitchell.

Debutant Venkatesh Iyer hit his first ball in international cricket for four before Rishabh Pant got the winning runs.

The game marked the start of a new chapter in Indian cricket with Rohit as T20 skipper and Rahul Dravid as head coach.

With both teams resting some of their key players as part of workload management, it was very much an even contest before the first ball was bowled.

India raced to 50 for no loss in five overs with Rohit playing some delightful shots.

He got going with back to back fours off Tim Southee in the third over before unleashing his signature front pull on the final ball of the over.

The seasoned pace duo of Southee and Trent Boult were put under pressure upfront by both the openers. K L Rahul (15 off 14) got into the act with a massive six over deep square leg off Boult before Rohit hit another pull shot to collect 21 from the over.

Rahul fell to a soft dismissal on the first ball of Mitchell Santer’s spell to give New Zealand a wicket against run of play.

Suryakumar meant business from ball one and the most memorable shot of his innings was the pick up stroke off Lockie Ferguson to get to his third T20 fifty.

Both Rohit and Suryakumar should have gone on to finish the game but that didn’t happen.

From a straight forward 23 off the last 24 balls, India made it complicated by making the equation to 10 runs off the last over.

Earlier, Guptill and Chapman ensured New Zealand were well placed for a 180 plus total on a batting beauty but Ravichandran Ashwin’s double strike in one over put the brakes on the scoring rate.

Ashwin was the pick of the bowlers for India, taking two for 23 in four overs while senior pacer Bhuvneshwar Kumar (2/24 in four overs) too got his swing back.

Expecting heavy dew later in the evening, Rohit opted to field. Venkatesh was expectedly handed a debut while New Zealand made four changes to the playing eleven that played the T20 World Cup final on Sunday as part of workload management.

Bhuvneshwar, who looked far from his best in the T20 World Cup, got his trademark swing in the very first over of the match.

After a couple that shaped away from Guptill, he bowled a beautiful outswinger from length to breach Daryl Mitchell’s defence.

New Zealand reached 41 for one in the powerplay after a 15-run over from Deepak Chahar, who was guilty of bowling too short or too full.

The Hong Kong-born Chapman whipped and pulled Chahar for a four and six in the 6th over to give the innings much needed momentum.

India had the run rate under control until 10 overs with New Zealand reaching 65 for one.

Three big overs followed with Chapman and Guptill putting their foot on the pedal.

Chapman collected a four and six off Axar Patel in another 15-run over to bring up his first fifty for New Zealand, having played earlier for Hong Kong.

Guptill too looked in ominous touch at the other end as he deposited a slower one from Siraj over long-off.

Ashwin was brought back into the attack in the 14th and he struck twice at a timely juncture for his team with New Zealand getting to 123 for three in 15 overs.

With Guptill in full flow, even 200 seemed on the card but the opener was caught in the deep in the 18th over.

India did well in the last five overs to concede 41 runs besides taking three wickets.