Williamson's absence will be a major blow to the New Zealanders, who go into the first ODI in Hamilton on Wednesday low on confidence.

New Zealand suffered a big blow ahead of upcoming ODI series as regular skipper Kane Williamson has been ruled out the first two matches against India. Williamson suffered a shoulder injury during the third T20I at Seddon Park. Due to that niggle, he didn’t feature in the last two T20Is in Wellington and Mt. Maunganui afterwards. There is no official confirmation if Williamson will be available for the last ODI either, albeit he will start batting again later this week and is expected to fully recover ahead of the two-Test series beginning February 21.

Left-handed batsman Mark Chapman has been called up to replace of Williamson in ODI squad. Tom Latham will lead the side in Williamson’s absence with the series starting on Wednesday (February 5). Tim Southee had led New Zealand in the last two T20Is.

The 29-year-old Williamson is expected to ease himself back into training with the aim to be ready for the third ODI on February 11. The X-ray scans have ‘cleared him of anything serious’.

NZ team physio Vijay Vallabh feels Williamson was trying to shrug off the shoulder injury that kept him out of the last two T20Is. “Kane has had an X-ray scan which cleared him of anything serious, but it’s best for his recovery that he avoids aggravating the joint for the next few days,” he said in a statement.

“He will continue his fitness training sessions throughout the week and will start batting again on Friday with the prospect of being available for game three next Tuesday.”

Williamson’s injury provides a brilliant opportunity for Chapman to impress the selectors with his talent. The 25-year-old former Hong Kong batsman, who plays for Auckland Aces, impressed everyone with a fine first-class century in the drawn first four-dayer against India A in Christchurch last week.

Before that, Chapman had scored a match-winning century for New Zealand A in their 3-2 one-day series win over India A.

“It’s disappointing for Kane, but with so much important cricket still ahead this summer we must take a safety-first approach,” chief selector Gavin Larsen said. 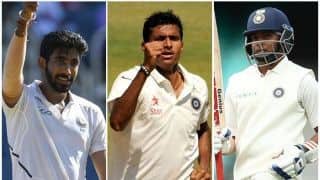