India has taken a 4-0 lead in the ongoing five-match T20I series against New Zealand. With a game to go, Virat Kohli-led India would like to blank the hosts. It is no secret that India pacer Navdeep Saini has an enviable eight-pack ab. Now, we know the secret behind it. On the eve of the last and final T20I at Bay Oval, Mount Maunganui, BCCI posted a video where it gives a glimpse of Saini preparing his superfood.

In the 54 seconds video, he shares the ingredients he uses to prepare it as he has India middle-order batsman Manish Pandey by his side waiting eagerly to have the smoothie. The 27-year-old pacer reveals that he uses bananas, a spoon of protein, dry fruits and an apple to prepare it. With a towel wrapped around him, he chucks all these ingredients in the blender and once it is prepared, he shares it with Pandey.

Finally, the two cricketers hug each other.

Navdeep Saini reveals his superfood as he makes fruit smoothie for @im_manishpandey.💪😎

Watch to know how it turned out. pic.twitter.com/J9PKsLCjaB

After having the smoothie, Pandey admits that it is the best smoothie he has ever had. 30-year-old Pandey got among the runs when the team needed him to stand up and get counted in the fourth T20I at Wellington. He scored a valuable 36-ball 50.

The match eventually ended in a tie with India winning in Super Over, their second successive victory in this manner on the tour. “It has been our motto, not only for these two matches, that till the time the last ball is bowled, we won’t give up any match,” Pandey said during an interaction with the media after the match.

Meanwhile, India has taken a 4-0 lead in the ongoing five-match T20I series against New Zealand. With a game to go, Virat Kohli-led India would like to blank the hosts. 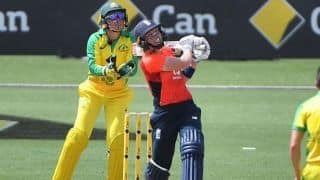