Latest weather update India vs New Zealand ICC Cricket World Cup 2019: The contest has been abandoned as umpire have made their mind. Persistent rain has forced the match to be called of without a ball bowled at Trent Bridge. The points will be shared.

Umpires are out in the middle. The official World Cup handle has just tweeted a video saying the showers are back. Pitch still under the covers.

So, as per our man at the venue, “Another spell of rain lashes Nottingham. And this one is relentless. This ought to be it for the match.”

Rain still on at Trent Bridge; : So, it s early lunch time for the folks at Nottingham. Umpires were out in the middle and seems unsatisfied with the condition of the outfield. Another inspection scheduled at 6:00 pm IST

Match could be 30-over-a-side contest

The drizzle is back. Covers being put back on. Groundsmen running around

Outfield wet at Trent Bridge; Toss will be delayed. An update to be provided soon – 40 minutes to toss, so likely to have a delayed start

Weather update from Nottingham: Been drizzling since morning. Stopped for a while but started raining again. Not heavy rain. Light drizzle. The start is likely to be delayed for starters

It is raining in Nottingham

The weather update from Trent Bridge Nottingham is the there is 90 per cent chance of rain at 11:oo am local time (3:00 pm IST) for Match 18 between India and New Zealand.

It was raining throughout on Tuesday, forcing cancellation of practice sessions for both the teams and and while India got some practice in on Wednesday, conditions were overcast and it is not looking any better for match day either. Both teams are unbeaten in the competition so far, and more than one team dropping the points, it likely that they will have to split the points.

Below is the weather forecast for the day at Nottingham:

The idea of two quality sides squaring off against each other in the biggest cricket tournament is one thing, and the possibility of it actually taking place is another. This World Cup has already proven to be the most rain-effected edition in history, resulting in three washouts already two in a row, in the second week of the tournament and Nottingham threatens to add one more to the hit-list of England s inclement weather.

Things in the city have been grim. It rained almost entire Tuesday and didn t improve much Wednesday. In this while, India and New Zealand have missed out on a practice session each. In the initial hours of Wednesday, the rain decided to subside during which the Indian batsmen had a go in the nets, before the heavens opened up again. To make matters worse, as per forecast, 90 percent rain is expected on game day, even though the chances of a truncated match can t be ruled out.

But for India, rain is not the only factor they have to deal with. Shikhar Dhawan s thumb injury, the news of which created a furore in Indian media, promises to come as big jolt to the team, considering his brilliant record in ICC tournaments and simply the fact that he scored a fascinating century in the previous game against Australia. Although he has been kept back in England and continues to be monitored, he is set to miss Thursday s game. 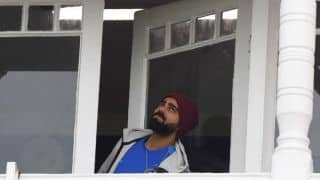