A win in the first T20I will take India to 13 consecutive wins in T20Is, the most by any team in the format.

New Delhi: Team India is set to take on South Africa in a five-match T20I series. India will be without the services of a few big guns as BCCI rested the likes of Virat Kohli, Rohit Sharma, Mohammed Shami and Jasprit Bumrah from the series. Ahead of the first T20I, stand-in skipper KL Rahul, and Kuldeep Yadav were also ruled out of the series due to injuries. Rishabh Pant will now lead the team against the Proteas.

Team India is on the cusp of a major milestone ahead of the first T20I in Delhi on June 9. India is on a 12-match winning streak and a win in Delhi will make them the first team to win 13 T20Is in a row.

Ahead of the enthralling series, here’s a glimpse of India’s juggernaut in T20Is that brought them to the brink of this historic milestone.

India had a poor run in the T20 World Cup as they bowed out of the tournament before the playoffs, after losing back to back games against Pakistan and New Zealand. Their winning streak started with a hat-trick of wins against Afghanistan, Scotland and Namibia in the showpiece event.

The Rohit Sharma-led side then hosted New Zealand for a three-match T20I series. New Zealand made it to the final of the T20 World Cup and was in good form. However, the Kiwis were no match to team India, who comprehensively won the series 3-0.

After crushing New Zealand, India played dangerous West Indies at home. The Men In Maroon are a top side in T20Is but team India was too good for them as Rohit Sharma led India to a 3-0 clean sweep, taking their winning streak to 9 games.

Next in line was Sri Lanka, who has had a torrid run against India of late. The Dasun Shanaka-led side arrived on Indian shores to pull off a massive up, but the in-form team India was at its peak. The team failed to challenge India as the hosts romped to a 3-0 win in the series. 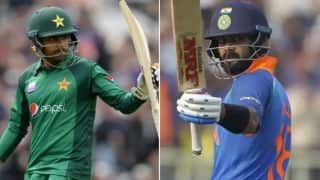 IND vs SA: KL Rahul Posts Emotional Note After Being Ruled Out Of The Series Due To Injury