Karun Nair s exclusion from the Indian squad the two-match Test series against West Indies had many experts surprised as he was left out without being given the chance to perform.

Karun Nair s exclusion from the Indian squad the two-match Test series against West Indies had many experts surprised as he was left out without being given the chance to perform. After warming the benches for the first four Tests against England in England, he was left out for final Test in favour of Hanuma Vihari, who was drafted in after the third Test.

In the meantime he missed out on India A tour, in which Vihari and Prithvi Shaw scored heavily to push their case. And while Vihari and Shaw retained their places for the WI series, Nair missed out giving him little game time.

However, India A are set to tour New Zealand in mid-November for a three- Test series and Nair in all likelihood would be a part of the series. With the four-match Australia series set to begin on December 6, the 26-year-old could very well have a chance to get back in contention for the Test selection down under.

Along with Nair, opener Murali Vijay who was dropped for the final three Tests against England and was no not named in the West Indies series could also get a chance to put his name forward for the Australia series.

After scoring just 26 runs in the first two Tests, Vijay, 34, got back to form with scores of 56, 100, 85, 80 and 2 for Essex in the 2018 Country Championship. Surprisingly, the performances against Essex also did not merit Vijay s selection for the WI series.

Nair had even led the Board President s XI for a two-day warm-up match against WI at Vadodara, yet was not named for the series.

Chairman of selectors MSK Prasad then said that the selection committee has explained to Nair the reasons that led to his axing from the series. I personally spoke to Karun soon after the selection of the Test Team against the West Indies and told him ways to make a comeback. The selection committee is very clear with regard to the communication process, Prasad told PTI on Monday. 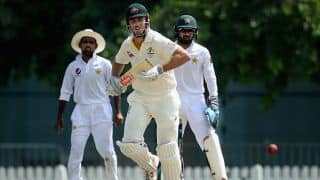 Maybe Pakistan were scared to play a spinner in A team: Josh Hazlewood