Sanju Samson registered his highest List-A score of 91 as India A posted a strong total of 204/4 against South Africa A in a rain-curtailed match that was reduced to 20-over a side after a lengthy delay owing to wet outfield at the Greenfield International Stadium, Thiruvananthapuram on Friday.

Samson was in blistering form after captain Shreyas Iyer won the toss and opted to bat first in the final match of the series. He raced to his fifty off just 27 balls and looked set for his maiden triple-figure score in List A, but was caught brilliantly by Janneman Malan off the bowling of Geroge Linde in the 16th over.

During his knock, the Kerala wicketkeeper batsman hit six fours and seven sixes. He was ably supported by opener Shikhar Dhawan, who scored 51 off 36 balls combining for a stand of 135 runs for the second wicket in just 12.3 overs. India A had lost Prashant Chopra in the first over for just two runs to Beuran Hendricks.

Early in his innings, Dhawan was hit on the back of the neck while attempting a standing scoop shot off Hendricks. Play was halted for a while, but Dhawan resumed his innings shortly afterwards.

ALSO READ: Shikhar Dhawan hit on the back of the neck during 5th unofficial ODI

Iyer contributed 36 off 19 with the help of five fours and one six while Shivam Dube made a run-a-ball unbeaten ten.

India A have already sealed the five match series, winning the first three matches, while South Africa A managed their first win of the tour, claiming the rain affected 4th unofficial ODI yesterday. 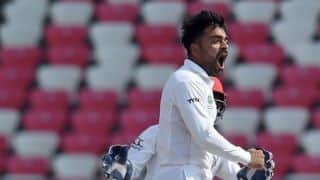