India will hope to perform better than they did in the 2nd Test at Colombo against Sri Lanka.

Colombo: Handed an unexpected thrashing in the opening game, India would look to plug their loopholes and get their team combination right even as Sri Lanka eye a series winning farewell for their iconic batsman Kumar Sangakkara in the second cricket Test starting here tomorrow. The visitors dominated the first Test in Galle, yet ended up on the losing side, going down by 63 runs after having the hosts on the mat for a major part of the game. Despite all talk of aggression and winning attitude, when it mattered most, the Indian players failed to bring up the goods with both bat and ball. Read: India vs Sri Lanka 2015, 2nd Test at Colombo Preview

Middle-order batsman Dinesh Chandimal‘s counter-attacking hundred was not the first of its kind, yet the team was unresponsive and didn’t have a plan C after their plans A and B failed. While batting, they collapsed under pressure to quality spin bowling, just like they had done against the likes of Moeen Ali and Nathan Lyon on the English and Australian tours respectively. In nine Tests on those two tours, Indian batsmen conceded 42 wickets to two spinners. With the addition of 15 more wickets in the Galle Test, it makes for a staggering 57 wickets to spinners in just 10 matches outside India (not counting the drawn Bangladesh Test). Read: Kumar Sangakkara assured of a place in history following retirement

The P Sara wicket is expected to have more bounce, but it will still support spin bowling, and as such the team management will be worried about the Lankan attack despite deflecting attention off India’s spin problems in the aftermath of the Galle Test. It will put sharp focus on their selection. Yesterday, opener Murali Vijay batted comfortably in the nets. But more than that, he also played football, the team’s pre-practice warm-up ritual and it was the best indicator yet that his right hamstring is holding up just fine. Read: Virat Kohli boosted my confidence: Amit Mishra

Therefore he is expected to come back into the XI and replace the injured Shikhar Dhawan who was ruled out of the rest of the series owing to a right hand injury sustained in the first Test. Despite his twin failures in Galle, Rohit Sharma is expected to play and indeed bat at number three again. Compared to the out-of-favour Cheteshwar Pujara, he has looked busier in the nets, batting in pairs with Virat Kohli and also taking catching practice at third slip.

It puts the focus squarely on the combination of the playing eleven, and herein Stuart Binny comes into the picture. Both the skipper and the team director have made their idea of a five-pronged attack clear. But in the Galle Test, the fifth bowler was used more as a fallback option to rotate the primary four bowlers. This role didn’t suit Harbhajan Singh’s stature, nor could the senior off-spinner do justice to that role. In a way, it also weakened India’s batting position. Read: Sri Lanka aim winning farewell to Kumar Sangakkara against India

The S.O.S call to Binny within 24 hours of that match ending means that he can be expected to play this role in the second Test, and he is no stranger to it, having done so earlier in three Tests in England. This move underlines India’s search for an all-rounder again, and it will be keenly observed if Binny can provide that answer in the short term. Yet, this second Test will be more pertinent indicator of the mindset of this team than anything else. Ever since the new Test skipper and the team director have joined hands, there has been a lot of talk about winning matches with an aggressive brand of cricket.

In four matches that Kohli has led thus far, he is still to taste victory, losing twice in Adelaide and Galle when victory was in sight. The question is will they up the ante now, when it matters most, with the series at stake. They will look to take inspiration from the last trip here, when in 2010, India beat Sri Lanka by five wickets, thanks to hundreds from Virender Sehwag and VVS Laxman. Coincidentally, Ishant Sharma, Amit Mishra and Murali Vijay were part of that victory and might be able to help their team push in the right direction. Read: Virat Kohli warns rival countries on completion of 7 years in international cricket

India could take some confidence from the fact that Mishra, Vijay, now a solid opener, and Ishant, the leader of the pace attack, played in that rare win. Mishra’s performance in Galle – 2 for 20 off six overs and 3 for 61 in 17 – could be forgotten in the midst of Rangana Herath and Dinesh Chandimal’s splendid performances with the ball and bat.Mishra though insisted that the Indian think-tank will continue to bowl an attacking line to Chandimal, whose knock gave the hosts a chance to defend in the first Test.

Even otherwise, India’s record at the P Sara Oval is pretty decent, with two drawn matches (1985 and 1993) and only one loss (2008) here. This time around the ground will hold higher significance though, for it will mark the culmination of Kumar Sangakkara’s prolific international career. This will be the left-handed batsman’s 134th and final Test. The build-up to his final appearance on the big stage has been muted thus far, but it should kick into high gear this coming week. And the hosts will want to send him off with a final Test series win over their neighbours and close rivals. As such, Sri Lanka are expected to name the same eleven as in the first Test. 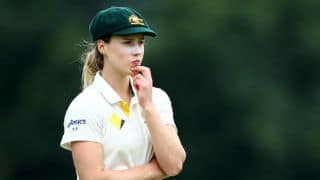