IND-PAK will clash in the T20 World Cup 2022 later this year in Melbourne.

New Delhi: India-Pakistan relations are in turmoil due to the political tensions between the two countries. However, cricket is one thing that has kept the people connected. Fans from both countries are great admirers of cricketers from the other country. Virat Kohli enjoys a massive fan following in Pakistan, while Babar Azam has many fans in India.

Cricket lovers from both countries want to see cracking cricket between the two countries, which is only possible only in ICC events these days. Notably, India and Pakistan have not played bilateral series since 2013.

Meanwhile, a picture from the 3rd ODI between England and Netherlands is going viral on social media, where an Indian and a Pakistani fan is sitting beside each other with flags of their respective countries, having a great time together. The image has gained lots of love from the fans on social media.

Pakistan and India fans at the Netherlands versus England match #Cricket pic.twitter.com/BCGBCc3YRH

Pakistan and India fans at the Netherlands versus England match #Cricket #PakistanCricket#PAKvSL pic.twitter.com/1eZXjDNy92

The 2021 T20 World Cup was a historical event for Pakistan and they defeated India for the first time in a World Cup. The Babar Azam-led side defeated the Men in Blue by a crushing margin of 10 wickets. The loss also ensured that India don’t make it to the playoffs of the showpiece event.

The two arch-rivals will now clash on 24th October 2022, at the Melbourne Cricket Ground in the T20 World Cup 2022. An India-Pakistan match is the cream of any ICC event thus the apex body ensures that the two teams are clubbed together in the group so that fans can witness an iconic IND vs PAK match.

Speaking about Netherlands vs England series, the Eoin Morgan-led side toured Netherlands for a three match ODI series and comprehensively won all games. 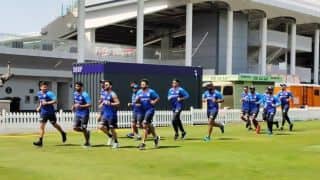 India vs Leicestershire Live Streaming: When and Where To Watch The 4-Day Warm-up Game