India have included Dinesh Karthik and Shardul Thakur in the 15-man squad for 3 ODIs against New Zealand.

Board of Control for Cricket in India (BCCI) have named a 15-member squad for India s upcoming One-Day International (ODI) against New Zealand. It came only hours after New Zealand announced their ODI and T20I squads for the tour.

Virat Kohli will continue to lead the side, with Rohit Sharma acting as vice-captain. Notable exclusion from the side are KL Rahul, Mohammed Shami and Umesh Yadav, who featured in the recently concluded ODI series against Australia. The selectors have decided to put faith in Dinesh Karthik and Shardul Thakur, who displayed a good show in domestic cricket. Shikhar Dhawan too finds a place back in the ODI scheme of things after giving Australia series a miss due to family emergencies.

Despite a poor outing against Australia, Kedar Jadhav and Manish Pandey keep their place in the side. MS Dhoni will keep wickets, while Akshar Patel, Kuldeep Yadav and Yuzvendra Chahal will marshall the spin attack.

Bhuneshwar Kumar continues to the lead the bowling pack, along with Jasprit Bumrah.

The ODIs will be followed by a 3-T20I series as well. 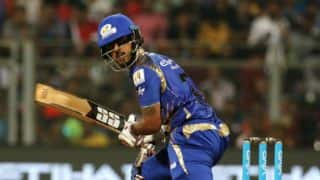