Batting legend Sourav Ganguly feels that the four-match Test series between India and Australia that got underway on Thursday in Adelaide will be won by the team which shows better application with the bat.

Batting legend Sourav Ganguly feels that the four-match Test series between India and Australia that got underway on Thursday in Adelaide will be won by the team which shows better application with the bat.

On Thursday, Australia drew the first blood when they blew away India top-order in quick time on Day 1 of the first Test. By 11 overs, KL Rahul, Murali Vijay and captain Virat Kohli were back in dressing room, all falling to loose drives inside 11 overs.

“Adelaide is not a bad venue for India to start,” Ganguly wrote in his column for The Times of India on Thursday. “The wicket is generally helpful to the batsmen. The Indians, though, will not mind a fair bit of grass on the pitch because that will help them to pick 20 wickets. But once again, I feel this series will be decided by who bats better. India will look for contributions from everyone and not just Virat Kohli if they have to succeed in this series. It has to be a contribution that will change the game.”

India have been tagged as the favourites after what has transpired for Australia since that ball-tampering scandal in South Africa. There’s been a lot of hype around the tourists especially Kohli and the pace attack. However, Ganguly has dismissed the talks of the home team being weak in their own conditions.

“There is lot of talk about favourites. I have never believed in this tag but I also never consider a host team a weak one in their home conditions. The world, for the last 30 years, has seen some exceptional Australian players. It would be said that other than the eleven playing, there were eleven others who were just as good. Compared to that aura one can arguably say, that from the batting point of view, this Australia side is not the same. However, everyone needs to remember that for all these players, who will be playing, these are home conditions. They have been born and brought up in this environment and will play a lot better than they would in India and England.”

Ganguly has picked out the trio of Peter Handscomb, Travis Head and Shaun Marsh the one to look out for during the tour and India will do well to not take Australia lightly.

“… the likes of Peter Handscomb, Travis Head, and Shaun Marsh will be handy in their conditions. So don’t underestimate them [Australia] and I am sure India will not. The Australian bowling attack is still very good. Every good Test team over the years have had good spinners and so along with the likes of Pat Cummins, Josh Hazelwood, Mitchell Starc, I have a feeling Nathan Lyon will also keep the pressure on,” he wrote.s 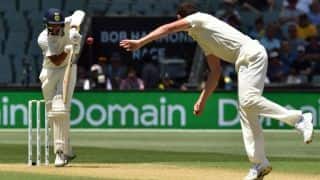