Players were seen engaging in war of words with some even pushing and shoving each other. 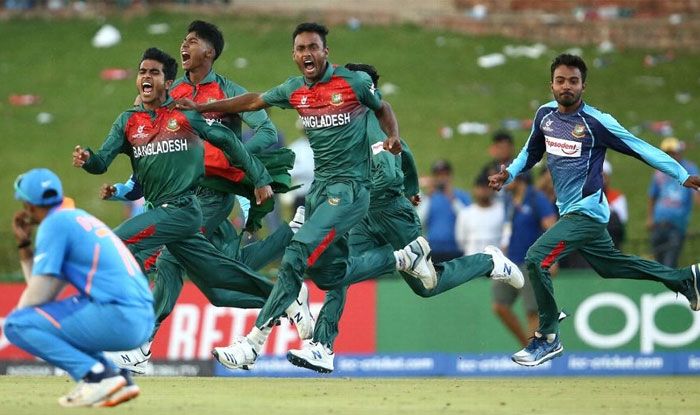 The final of the 2020 ICC Under 19 World Cup ended in controversy after players from both teams nearly came to blows after Bangladesh hit the winning runs in a tense finish. As a result of Bangladesh’s over-the-top celebrations. Players were seen engaging in war of words with some even pushing and shoving each other. Even the Bangladesh flag was damaged.

Skippers Priyam Garg and Akbar Ali rued whatever transpired after the final, with the India batsman calling it “ugly”. “We were easy. We think it’s part and parcel of the game – you win some and you lose some,” he said. “But their reaction was dirty. I think it shouldn’t have happened. But it’s okay.”

The ICC is said to be taking the matter seriously with match referee Graeme Labrooy expected to address the issue. Bangladesh bowlers were aggressive from the word go, with fast bowlers Shoriful Islam and Tanzim Hasan Sakib mouthing words to India openers Yashasvi Jaiswal and Divyansh Saxena. When Jaiswal was dismissed for 88, Shoriful didn’t shy away from giving the batsman a strong send-off. Even the two sets of fans at Senwes park could were overwhelmed by the occasion with bottles being thrown from the stands.

Bangladesh captain Akbar apologised for his players’ behaviour, saying the emotions probably stemmed from the cricketing rivalry between India and Pakistan. “Cricket is known for being a gentleman’s game. So I’ll say, I’ll be sorry for my team,” he said during the post-match press conference.

“What happened, it should not [have] happened. I don’t know what exactly happened. I didn’t ask what was going on. But, you know, in the final, emotion can come out, and sometimes the boys were getting pumped, and emotions were coming through. As a youngster, it shouldn’t happen. In any position, in any manner, we have to show the respect to the opponent, we should have respect for the game.

“I’ll say India-Bangladesh rivalry bring the part, and before the World Cup final, we lost the Asia Cup final to them a couple of months ago. So I think the boys are really pumped up and take a revenge,” Akbar said. “I won’t say it should have happened, but I will be sorry for my side.”

India Under 19 team manager Anil Patel informed that the team management took up the issue with the ICC and that the body will come up with an addressal on Monday after carefully studying the footages of the final.

“The referee came to me. He was sorry about the incident. He clarified the ICC is going to take very seriously what has happened during the match and the last session and they are going to witness the footage and they will tell us in the morning [on the next step].”