Rohit Sharma and Virat Kohli added 230 runs for the second wicket, setting up a colossal 331-run target. New Zealand punch well above their weight, but fell painfully short by 6 runs in the 3rd ODI at Kanpur.

There were two spectacular partnerships for the second wicket. Rohit Sharma and Virat Kohli crushed New Zealand to pulp, and Colin Munro and Kane Williamson then counterattacked India until they were forced to panic. But the New Zealanders were under the pressure of chasing a colossal total. While trying to heave a tossed-up delivery, Munro failed to connect and ended the stand at 109 runs. His comrades tried to emulate the belligerence. As always is the case, they punched well above their weight. Tom Latham almost rescued New Zealand. However, none of his comrades could rise above Jaspirt Bumrah in the death overs. The visitors fell painfully short by 6 runs. India won the three-ODI series 2-1.

Green Park in Kanpur saw a number of records unfold. On his way to 15th ODI hundred, Rohit became only the second Indian to bludgeon 150 sixes. He took the second-least number of innings (165); Shahid Afridi tops the list with 160 innings, while MS Dhoni had taken 192.

Kohli scored the 83 runs he needed to complete 9,000 runs in the format, also becoming the quickest to do so. He achieved this in 193 innings, dethroning AB de Villiers who had attained it in 205 innings.

Rohit and Kohli, who added 230 runs together, are now the only players to score over 1,000 runs in ODIs this year. Their magnificent hundreds propelled India to 330 for 6.

Such fierce was India s batting that Tim Southee and Trent Bolt conceded 147 runs between them. Mitchell Santner was the pick of the bowlers, taking 2 for 58.

New Zealand played neck-and-neck in reply. Munro hit Bhuvneshwar Kumar over the leg-side boundary off the very first ball he faced, following it up with a hat-trick of fours. New Zealand collected 19 runs off the first over.

It was a contradicting performance from the Indian pacers. While Bhuvi was taken to cleaners on his home ground, New Zealand could not read Jasprit Bumrah s sling-shot action. Martin Guptill joined the rampage and cracked a four, but he could not match Munro s aggression this evening. Bumrah had him caught at mid-off, picking up his 50th ODI wicket. He became the second-fastest Indian to the mark, as he took five more innings than the topper Ajit Agarkar did.

Four overs later, Chahal spun Williamson back to the pavilion. The scorecard read 168 for 3, as the New Zealand captain walked back scoring a resolute 64.

The onus rested on Ross Taylor and Tom Latham, the heroes of the Mumbai ODI.

Despite the dew factor, the Indians did considerably well. However, the track had not worn down. Taylor and Latham manoeuvred the ball beautifully in the gaps. Before the Indian team realised, the duo took New Zealand to 247 for 3 in 40 overs. They needed 9.1 an over.

Kohli had not invested Bumrah, the highest wicket-taker in death overs. Bumrah had given only 19 off 6 overs thus far. He began with an off-cutter. Taylor came forward to press it down, but the extra bounce took an edge to backward point.

New Zealand were not yet out. Latham has been in ominous form and, to make matters worse for India, Henry Nicholls is armed with good technique. There were no ugly heaves or rash shots. The duo picked gaps, and the fast outfield took care of the rest. The equation came down to 55 off 6 overs.

Kohli was brave to give Chahal his last over at this juncture. His leg-spin gives the leg-handers an angle to clear the leg-side field, but Chahal, as smart as ever, bowled away from the batsman’s body and made them reach for the ball. He conceded a mere 5 runs off it. Although the require run rate shot up, Latham and Nicholls made sure they do not lose the plot.

Kohli went back to his death bowler, revealing that New Zealand will face 3 of remaining 5 overs from Bumrah.

Latham held the key, but Nicholls did not want to keep himself out of the limelight. He hit Bumrah for a four and six, collecting 15 runs off the over. New Zealand needed 35 off 24.

Kohli had to go to Bhuvi, asking for breakthrough. Until then he had given away 77 runs in 8 overs. Every New Zealanders had taken his array of variations apart. But this is Bhuvi’s home ground, and he wanted to make it count. He used his strength, the yorker. Nicholls was dismissed before he could get his bat down. Only 5 runs came off the over. New Zealand needed 30 off 18. In came the devastating Colin de Grandhomme.

Bumrah, too, had an epiphany that India had not used their primary weapon. He yorked the New Zealanders, giving nothing away. Although he could dismiss any batsman off his own bowling, he ran out the dangerous Latham.

New Zealand need 15 off the last over, off Bumrah’s over. The first three overs gave away only 3 runs. New Zealand needed 12 off 3. Bumrah bowled a rank full toss. Santner middled it but could not clear Shikhar Dhawan at deep mid-wicket. New Zealand then collected a single. With 11 needed off the last ball, all the fighting New Zealanders managed was a four, falling short by 6 runs.

Player of the Match: Rohit Sharma

Player of the Series: Virat Kohli 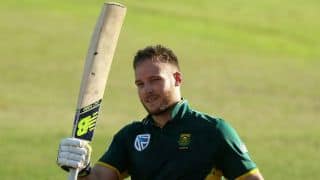 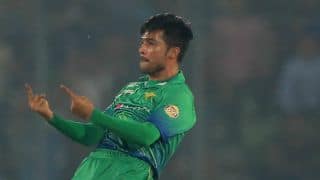