Adelaide: India maintained their unbeaten record against Pakistan in World Cups as they trumped their arch-rivals by 76 runs at the Adelaide Oval. In the process, they began their ICC Cricket World Cup 2015 campaign on a high and will take confidence moving ahead. Virat Kohli’s century and good fifties from Suresh Raina and Shikhar Dhawan set the tone for India as they posted 300. In reply, Pakistan crumbled in the middle overs and lost wickets at regular intervals, getting bowled out for a total of 224 from 47 overs. With the win, India gained two points and are currently topping Pool B, having edged South Africa out due to their super net run-rate.

In their run-chase of 300, Pakistan seemed to be in control with Ahmed Shehzad batting well and keeping control. Haris Sohail also looked in good touch during his 36. However, Ravichandran Ashwin’s tight spell helped India get back into the contest. He not only bowled a few maidens in the middle but picked up the wicket of Sohail. That opened the floodgates for India.

In came Umesh Yadav and increased the pressure by dismissing Shehzad for 47 and Sohaib Maqsood in the same over. Pakistan never recovered thereafter despite Misbah-ul-Haq’s lone act. He got a fifty again, but it was the same old story. He was a lonely figure amidst the ruins.

There was a controversial moment in the game as Umar Akmal was given out caught behind in what seemed like a thin edge. Initially, the umpire had not given him out. MS Dhoni went for the referral, and the snickometer showed a small deflection, although nothing was visible to the eye. The umpire reversed the decision and sent Akmal packing. Apart from that, it was a game majorly dominated by India, although Pakistan had their moments.

Perhaps Pakistan’s strategy of playing five bowlers hurt them. Only Sohail Khan had a good day as he picked up five wickets. Yasir Shah, the leg-spinner off whom there were many expectations, was hit for 60 runs in his eight overs. In the process, they left out Sarfraz Ahmed, the wicketkeeper batsman, who has been one of their good players in the last year. Younis Khan was made to open, only for the third time in his career. ICC Cricket World Cup 2015: SCHEDULE & MATCH DETAILS

India won the toss and chose to bat, banking on two main partnerships. Kohli and Dhawan put up 129, whereas Raina and Kohli put up 100. Dhawan’s 73 set the tone for India early on as he fought fire with fire. Kohli’s 107 was a different innings. Normally the enforcer,

Kohli took more of a backseat this time as Dhawan and Raina were the aggressors. Raina smashed 74 off 56 balls, which helped India charge in the slog overs and push towards 300.

India could have gotten a lot more runs had they kept their wickets intact. Sohail’s inspired spell dented them towards the end as he snared important wickets in completing his five-for. Perhaps, they would have felt they could have got 310-320. ICC Cricket World Cup 2015: Complete Coverage

Now, India head to Melbourne to play South Africa on February 22. Pakistan will fly out to New Zealand to face Jason Holder’s West Indies on February 21 at Christchurch. 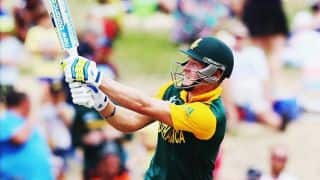