India courtesy of this win have won the series 3-0.

India have beaten South Africa by 337 runs in the fourth Test at Delhi. India have therefore won the four-match series 3-0.  India needed five more wickets to win the match after tea. India therefore move up to second in the ICC rankings as well. Going by the way things were going, it looked impossible as AB de Villiers was offering superb resistance. Ravichandran Ashwin picked up yet another five-wicket haul and Umesh Yadav finishes with three. However, Dane Vilas was the first to fall in the post-tea session for 13. He dragged a ball outside off on to his stumps. This opened the floodgates as de Villiers was the next to go for a 297-ball 43. This is the third slowest innings by a batsman playing over 200 deliveries. Ravichandran Ashwin dismissed de Villiers as he was caught at leg slip. Full Cricket Scorecard: India vs South Africa 2015 4th Test at Delhi

Kyle Abbott was the next in line as a full in-swinging delivery knocked over a couple of stumps. India could just sense a win at this stage and Umesh was absolutely on fire and he got out caught behind after Wriddhiman Saha took an excellent catch behind the wickets. India were on a roll Morne Morkel was the last man to go after he left alone a ball from Ashwin. Full Cricket Updates: India vs South Africa 2015 4th Test, Day 5 at Delhi

India have been on top of their opponents throughout the series and it is only fitting that they win the series 3-0. They could not complete a whitewash as the Bengaluru Test got washed out.  India won the first Test at Mohali by 108 runs and then followed it up with a win at Nagpur by 124 runs as well. Ashwin finished the series as the leading wicket-taker with 31 wickets and Rahane ended with 266 runs, which is the highest in the series. Rahane was the only one to score a century in the series.

South Africa have been hampered by injuries throughout the series. They lost Vernon Philander and Dale Steyn after the Bengaluru Test. Abbott and Merchant de Lange were called as cover. Abbott got a chance to play in the last two Tests, but de Lange did not get a single game.

Both India and South Africa had made a few changes into their side. India roped in Umesh came in place of leg-spinner Amit Mishra. South Africa on the other hand dropped Simon Harmer and got in Dane Piedt in his place. Piedt did well in the first innings as he picked up four wickets in the first innings, but went wicketless in the second. Kyle Abbott also came in to the side in place of the under-performing Kagiso Rabada. He repaid his debt in his skipper by picking up five wickets in the first innings and also picked up the crucial wicket of the dangerous Kohli in the second innings. Temba Bavuma was the third change, who came in place of Stiaan Van Zyl. Bavuma got off to good starts in both the innings but was unable to convert.

Man of the match: Ajinkya Rahane

Man of the series: Ravichandran Ashwin 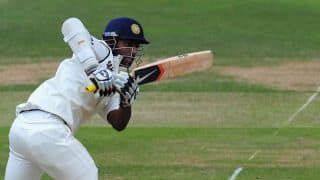