Riding on Manish Pandey's knock of 62 and Bhuvneshwar Kumar's four-wicket burst, India Blue registered a comprehensive win by 50 runs over Delhi in the final of the NKP Salve Challenger Trophy 2013, at the Holkar Cricket Stadium in Indore on Sunday. 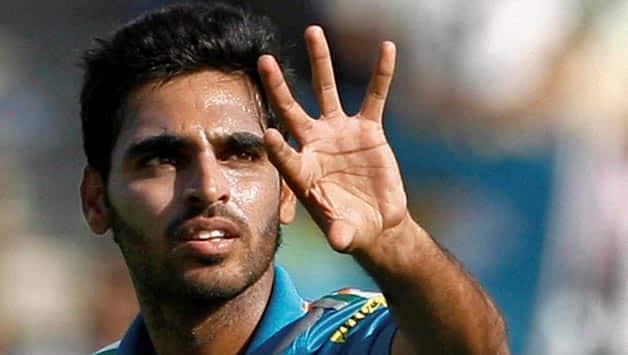 Riding on Manish Pandey‘s knock of 62 and Bhuvneshwar Kumar‘s four-wicket burst, India Blue registered a comprehensive win by 50 runs over Delhi in the final of the NKP Salve Challenger Trophy 2013, at the Holkar Cricket Stadium in Indore on Sunday.

Chasing a daunting total of 275 to win, Delhi’s star-studded top order flopped in the big game from which they could never really recover in the game, and were bowled out for 224 in 44.4 overs.

Milind Kumar fell after scoring 54 while Puneet Bisht remained unbeaten on 54 but their efforts went in vain.

It was due to a flop show from the Delhi’s top order consisting Virender Sehwag, Gautam Gambhir, Virat Kohli and Unmukt Chand that left Delhi under immense pressure in the crucial tie.

While Gambhir fell after scoring four on the fourth delivery of the innings, Chand went back to the pavilion soon for six in the third over of the game that left Delhi in a bit of bother.

Delhi’s woes increased when their in-form batsman Sehwag was cleaned up by R Vinay Kumar for five, and Kohli, who managed to spend sometime at the crease scoring 23 runs, had a mixup with Milind while taking a run and was run out in the 10th over that left Delhi reeling at 46 for four.

Earlier in the match, despite regular breakthroughs from Delhi’s Rajat Bhatia (four for 59) and Parvinder Awana (four for 39), India Blue reached 274 for nine in the final of the NKP Salve Challenger Trophy 2013. An important half-century from Manish Pandey (62) and vital contributions from Ankit Bawne (37) and Piyush Chawla (44) down the order helped their side post a good total.

Openers Akshath Reddy and Naman Ojha had a confident start. Both batsmen looked set to make big scores before Ojha played on a length delivery from Parwinder Awana to give the opposition their first wicket in the 12th over.

A few overs later, Reddy followed suit as he was foxed by a slower one from Rajat Bhatia. This was Bhatia’s first ball off his spell.

With Yuvraj Singh and Manish Pandey in the middle, another big partnership was brewing. The duo had the responsibility of rebuilding the score after they were reduced to 62 for two in the 17th over.