The Indian spinners ensured that England were never able to get away.

India bowled England out for 227 in the third One-Day International (ODI) at Trent Bridge. It was a story of two halves: while the fast bowlers bowled, there were numerous “Ooohs” and “Aaahs” as the edges evaded the fielders and England’s opening duo of Alastair Cook and Alex Hales put on a stand of 82. Then the spinners were introduced and England crashed from 82 without loss to 149 for six before a brief recovery.

The slide was started by Suresh Raina, when he induced an outside edge from a Hales sweep shot to MS Dhoni. Soon, Ambati Rayudu (who was called on to bowl as Mohit Sharma had hobbled off the field earlier) picked up his maiden wicket in ODIs when he had Cook stumped by Dhoni down the leg side. Dhoni also became the wicketkeeper with the most stumpings across formats with the dismissal. At 93 for two, both well-set openers were back in the hut.

Ravindra Jadeja then drew Joe Root forward only for Dhoni to whip off the bails in a flash as the Yorkshire batsman’s foot was in the air. A 23-run partnership then ensued between Ian Bell and Eoin Morgan before the latter edged one from Ravichandran Ashwin to Dhoni. Soon, even Bell was dismissed, brilliantly run out by Mohit Sharma, who was back on the field after hobbling off earlier in the day. Mohit’s throw from the deep caught everyone unawares, as even the bowler Raina was not paying attention to where the ball was.

Soon, Ashwin induced a faint edge from Ben Stokes as Raina took a stunning low catch to his left at slip. It was a refreshing change to see such a lithe catch at slip on a tour where India dropped more than they caught in the cordon. Jos Buttler and Chris Woakes then put on a bit of a stand, before Mohammed Shami induced a pull short from the latter with a very good short ball. Mohit took the catch in the deep as England sunk further.

James Tredwell and Buttler then managed to get in a few boundaries at the death. However, Ashwin soon had Buttler bowled with a beautiful piece of bowling. Tredwell managed a couple of late strikes, especially off Bhuvneshwar Kumar in the final over, as England stuttered to a mediocre score.

Earlier, India won the toss and asked England to bat. There was just one change respectively from each side, as Steven Finn got his first game of the India-England series when he replaced the wayward Chris Jordan. For India, Rohit Sharma’s injury forced them to draft Ambati Rayudu into the side, with Ajinkya Rahane slated to open the innings. 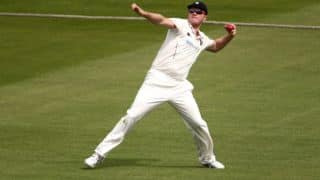