India have been bowled out for 223 in the second innings of the second Test against South Africa at Durban.

India have been bowled out for 223 in the second innings of the second Test against South Africa at Durban. India could only take a lead of 57 and South Africa would now chase it to win the game and the series. Ajinkya Rahane’s sterling 96 was the only bright spot for India.

After South Africa finished their innings at 500, India face a deficit of 166 runs when they started their final innings on Day Four. Vijay fell early as Vernon Philander outsmarted him with some good bowling. Dhawan, though, held firm and played 87 deliveries for his 19. His vigil came to an end courtesy a breathtaking catch by Faf du Plessis. Smashing one to mid-wicket, Dhawan was stunned as du Plessis flung himself in the air and held on to the ball as he came crashing down. Kohli and Pujara then saw India off to the end of day’s play at 68.

Off the first ball of Day Five, Kohli was dismissed as the ball left him and was collected by de Villiers. Steyn celebrated, but replays suggested that the ball grazed his shoulder and not the bat. Pujara was then snared with a snorter as it hit the top of the off-stump. India were then staring down the barrel.

Rohit Sharma and Rahane came together and they faced the tough task of battling the South African bowlers. A lot of words were exchanged between Steyn and Rohit. It made the contest a little more entertaining as some of the chatter was caught on the stump microphones. Rohit and Rahane did manage to essay a few good strokes in that phase as they pulled a few with conviction. Rohit even charged to Peterson and hit him into the stands at long-off.

However, Philander had Rohit as he trapped him in front of the stumps for 25. In came skipper MS Dhoni and stitched a determined partnership with Rahane. They took India within sight of overhauling South Africa’s lead, but Peterson came into play. Bowling from over the wicket, he had DHoni spooning a catch to mid-wicket. Ravindra Jadeja came in and then smashed a six over long-on. He attempted another over long-off, but was taken by Morne Morkel.

Rahane and Zaheer fought hard with the former doing most of the scoring. He farmed strike for himself and took singles and hit the occasional boundaries. Zaheer held on for 41 balls for his three runs and helped Rahane get through to his half century. Rahane hit a few magnificent shots. The six off Peterson over long-on being the most notable one. Zaheer though was dismissed leg-before by Peterson as he came from round the stumps and trapped him with one that turned into him.

Rahane continued his battle though. He smashed Philander with authority over the covers to move into the 80s. However, he was the last wicket to fall as he tried to get his ton with a big shot. 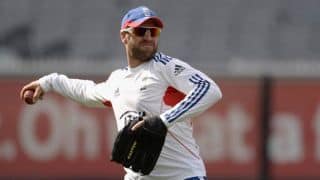 Ashes 2013-14: Matt Prior vows to regain his place as England wicketkeeper