Australia hit back after the Kohli-Rahane partnership.

India have been bowled out for 465 in the first innings of the third Test against Australia in Melbourne. India started the day on 462 for eight and it did not take much time for Australia to complete the formalities. Australia have taken the lead by 65 runs.

Ajinkya Rahane and Virat Kohli had put up a spirited 262-run stand and that kept India afloat. However, they lost their last seven wickets for a total of 56 runs. This would certainly disappoint them. India would go into the dressing room knowing that they have a job cut out for this Australian innings.

Had Kohli stayed on, the score could have been extended. However, his dismissal off the last ball of the third day put Australia in command and they finished the job today. Though the lead of 65 is not sizeable, they do have enough to put pressure on India.

Live Blog of the match 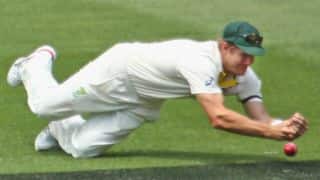 India vs Australia 2014-15, 3rd Test at Melbourne: Catches that could cost Australia the match