India will rue the two dropped chances but they can still cash in on the pressure to create an opportunity.

The Indian bowlers have done very well so far. Ishant Sharma bowled an exciting early spell where his accuracy was not up to the mark but he got abundant purchase from the pitch with a lot of lateral movement and extra bounce. In fact he had so much swing going for him he even conceded a few wides on account of it. Barinder Sran had a poor opening over but made up for it in his following overs. Even the spinners have done a decent job. Australia are yet to lose a wicket but there have been two dropped catches. Ishant was guilty for one drop in the deep and Ajinkya Rahane dropped the other — a very tough chance — at slip. FULL CRICKET SCORECARD: India vs Australia 2015-16, 2nd ODI at Brisbane

Aaron Finch and Shaun Marsh will both like to break free a little bit because it could get a little bit out of hand for Australia if the asking rate increases too much. He even bowled an off-side wide to Shaun Marsh which showed that he was struggling to control the swing. LIVE UPDATES: India vs Australia 2015-16, 2nd ODI at Brisbane

Earlier India scored 308-8 runs in their stipulated 50 overs. The lead run-scorer for them once against was Rohit Sharma who scored 124 off 127 balls. His efforts were backed up by half centuries from Virat Kohli and Ajinkya Rahane. Kohli got out for 59 runs while Rahane scored 89 runs of 80 balls. The Australian bowlers were not very impressive in the early overs but were highly effective in the death overs. James Faulkner bowled particularly well towards the end of the innings. 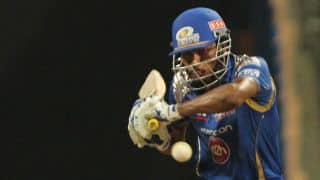