Cheteshwar Pujara and Shikhar Dhawan were the two unbeaten batsmen at stumps.

India buckled down in the final session to reach 71 for one at stumps against Australia on Day Three of the second Test. Shikhar Dhawan and Cheteshwar Pujara remained India’s unbeaten batsmen as the in-form Murali Vijay was dismissed with the score on 41. Mitchell Starc took the wicket, though it was Mitchell Johnson who looked threatening early on.

India started on a positive note, with Vijay and Dhawan showing some positive intent while facing a fired up Johnson. Vijay, who went past 1,000 Test runs against Australia during the course of his innings, looked particularly impressive during his 28-run knock, taking on Johnson and hitting as many as four boundaries. He was dismissed when Starc when the latter caused him to misjudge a delivery on off stump that seamed in just enough to take out the stumps as Vijay shouldered arms.

Thereafter Dhawan and No. 3 Pujara buckled down to play some watchful cricket. Both men curbed their strokes and tried to play with a straight bat. They decided to take quick singles rather than go for big hits, and decided to play for a draw. Both men remained unbeaten at stumps. If India manage to get a sizable lead, it could prove to be quite difficult for Australia on the fifth day on this track.

Australia were bowled out for 505 after their lower order continued to make merry against some abysmal bowling from India. Australia managed an imposing 97-run lead on Day Three of the second Test. Steven Smith and Mitchell Johnson massacred the Indian bowling with a thunderous 148-run partnership for the seventh wicket.

Australia, once in danger of folding up for just around 300, went past India’s total of 408 to take an imposing first-innings lead. Johnson was the first to go, edging Ishant Sharma to MS Dhoni. Smith was then bowled off the final ball of the over — dismissed for the first time in the series — for 133. That united Mitchell Starc — whose highest Test score of 99 came against the same opposition — and Nathan Lyon.

Starc seemed to take over from where Johnson left off, scoring quickly and playing some aggressive shots to the pacers. Lyon was happy to defend as the Indian bowlers toiled. Lyon was dismissed by Varun Aaron for a well-compiled 23. Starc scored his second Test fifty against India, while debutant No. 11 Josh Hazlewood gave an excellent account of himself as well. The pair used their long handles to great effect as the lead kept swelling. Their 49-run alliance for the final wicket remained unbroken at tea. However, they survived less than an over after tea as Ashwin took his second wicket, getting rid of Starc for 52. Hazlewood remained not out on 32.

Earlier, India started the day on an ideal note, with Ishant Sharma getting Mitchell Marsh clean bowled for 11, adding just four runs to his overnight score. New man Brad Haddin did not last very long either, getting caught at short leg by Cheteshwar Pujara while fending off a short ball from Varun Aaron.

However, that would remain India’s last success for the session. Johnson, batting at No. 8, came in and was greeted by a barrage of short balls. While there were a few plays and misses initially, an over-abundance of short balls eventually got old, as Johnson got a good measure of the bowling.

Johnson looked every bit the batsman who scored a Test hundred in South Africa as he unfurled pull shots, back foot drives, and later some good old slogs en route to his 37-ball half-century. Johnson hit Aaron for three fours in a row to get to the landmark. He later hit Ravichandran Ashwin for a big six over long-on in a manner reminiscent of his assault on Graeme Swann on this very ground a year ago.

Smith meanwhile scored his sixth Test hundred, and second of the series, as he quietly went about his business with Johnson blazing away at the other end. Smith now has scores of 162 not out, 52 not out, and 110 not out in this series. India would be very worried at the moment, with the partnership between the pair has being worth 104, as Australia trail by just 57 runs.

Earlier, Australia resumed the day on 221 for four with skipper Smith unbeaten on 65 and Marsh on seven. Umesh Yadav was the pick of the Indian bowlers on Day Two with three for 48 as Australia were trailing by 187 runs behind India’s 408. 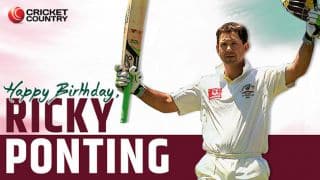