India have been bowled out for a paltry 148 on Day One of the fifth Test against England at The Oval. Coming into his game 1-2 down in the series, India didn’t show any fight and were rattled by the hosts. MS Dhoni hit 82 runs as he fought the bowlers and ensured India did not go down without a fight.

England had won the toss and put India in to bat. They came in with an unchanged side but India had two alterations. Stuart Binny and Ishant Sharma came in for Ravindra Jadeja and Pankaj Singh. Another humiliating day lay in store and Indian skipper Dhoni cut a sorry figure amidst the ruins.

Gautam Gambhir’s struggle on this tour continued as he edged his very first delivery to the wicketkeeper. James Anderson got it to shape away from him and Gambhir got the edge as he tried to get the bat out of the way. Cheteshwar Pujara had a brief stay in the middle and was ultimately bowled by Stuart Broad by one that came into him. The ball hit his back-elbow and went onto the stumps.

Virat Kohli walked out with a slightly modified technique and was looking to leave deliveries outside the off-stump. However, some of his leaves were jittery as the ball came back in. He did play a handsome cover-drive for a four, the first boundary for India off the bat. Kohli was ultimately dismissed when he left one from Chris Jordan and was adjudged leg-before.

Ajinkya Rahane lasted only eight balls and was out for a duck as he lobbed a catch back to Jordan in his follow through. Murali Vijay then edged one from Chris Woakes to third-slip. Vijay had been patient for 18, but lost his wicket to some good bowling.

The procession continued as Stuart Binny fell soon after lunch as he edged one from James Anderson. Ravichandran Ashwin looked assured as usual and struck a decent partnership, if one is to judge by India’s situation. However, Ashwin too fell to Woakes as Joe Root took another good catch at third-slip.

Through all that, Dhoni fought hard and was a measure of patience. He did attack a few overpitched deliveries and got boundaries, but the going was tough with wickets falling at the other end. He found some solidity in Ishant Sharma, who put up a 50-run stand with him. Dhoni was ultimately out for 82 as he pulled Stuart Broad to fine-leg. 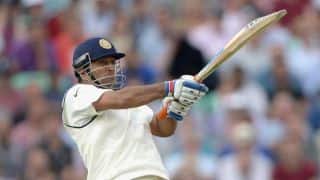