The Indians can go on to win the Test series, feels former Indian Test cricketer Arun Lal. “If India won the toss, they would have already run away with the Test,” said Lal.

But, isn’t it somewhat risky to bowl first in a Test match? “Here there was no option but to bowl first. The English bowlers bowled poorly on the first day. They stuck to the plan of bowling outside the off stump, thinking that the Indians would flash at some point of time. Cheteshwar Pujara and the others showed real restraint in leaving ball after ball. The Indian bowlers bowled much better, especially Bhuvneshwar Kumar.”

Lal had been an opening batsman for India when Richard Hadlee had come touring in 1988-89. Asked how the great New Zealander would have used the wicket, Lal said, “England would not be able to score 150 in ten attempts. He was a dangerous bowler.”

Lal has been most impressed by the performance of Bhiuvneshwar Kumar. However, there is a growing concern that the excessive workload on the young bowler may cause problems further down the line during this long tour. Will Kumar be able to complete the tour?

“If anyone can do that it is this lad. His bowling is pure rhythm.”

Lal believes that Kumar can bat higher up in the order.  “He looks so composed while batting. He has great temperament and pretty good technique in such swinging conditions. He can definitely come in higher up in the line up.”

Talking about the Test match, Lal said that it had been a fascinating contest so far. “No team has managed to get ahead of the other. This is a wonderful match. If India had bowled first they would have been way ahead by now. But, even otherwise, they can pull this off.” 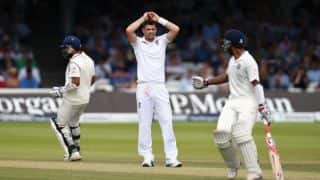