Today is the 4th anniversary of India's World Cup winning triumph in 2011.

On April 2 2011. when MS Dhoni hits Nuwan Kulasekara  for a six over long on to end the 28-year old wait for a title for India. India defeat Sri Lanka by 6 wickets to start a nation-wide celebration. India celebrated the 4th anniversary of the epic win on Thursday. See: 2011 World Cup final: India’s epic triumph over Sri Lanka

In the final, Sri Lanka had put a good total on board thanks to a brilliant century from Mahela Jayawardene. Sri Lanka were superb with the new ball when they took out Virender Sehwag and Sachin Tendulkar early. Gautam Gambhir and Virat Kohli steadied the ship for India with a fine stand. When Kohli fell, Dhoni walked out much to the surprise of everyone. He did not have a good run but on the day, he fired and fired big. He and Gambhir brought India close to the target with a 109-run stand. Gambhir dragged one onto his stumps and missed out on a ton but MS Dhoni finished the game with the Man of the tournament, Yuvraj Singh at the other end. Sachin Tendulkar finally finds his ‘lady love’!

Indian team had performed like a team with everyone contributing. Sehwag and Kohli had scored a ton in the opening game. Sachin Tendulkar scored his 98th International ton when he hit 120 in what turned out be a thrilling tie against England. India’s only loss came against South Africa. Yuvraj Singh was brilliant with both bat and ball in the entire tournament. His all-round performance came handy in the quarter-final against Australia as well. In the semi-final against Pakistan, Sachin top scored again and India won the game well in style to reach the finals. The team won for Tendulkar as promised

Sachin Tendulkar was the highest scorer for India, with 482 runs. Zaheer Khan was the top wicket-taker for India with 21 wickets. Yuvraj Singh scored 362 runs at an average of 90.50 to back up his fine bowling numbers. He picked up 15 wickets and also did not quite leak runs which reflects in his economy of 5.09 in the World Cup 2011. The master planner and architect of the WC champions India

Four years down the line, India could not defend the title as they lost to Australia in the ICC Cricket World Cup 2015 semi-final. Australia then went onto to win their 5th World Cup title.  But today is the day to celebrate India’s World Cup win anniversary. 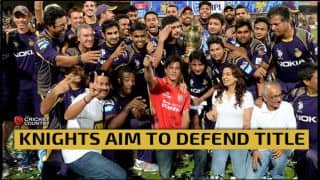