By virtue of this victory, India win the limited-overs leg of South Africa tour.

On a sluggish pitch, India‘s 172 for 7 didn’t look threatening. Nonetheless, their bowlers showed enough composure and learnt about the surface from the dugout during the first innings. India seamers dropped the pace off the ball, and strangled the South African batsmen in pursuit of 173 in the T20I decider. Skipper JP Duminy and debutant Christiaan Jonkers, with his late onslaughts sending shivers to the Indian camp, were the lone warrior.

Chasing 173, South Africa opted for David Miller and Reeza Hendricks to take the innings off to a flier. Miller — opening for the first time in his 227th innings — struggled from ball one. Hendricks departed off Bhuvneshwar Kumar. India’s pace trio — Bhuvneshwar, Jasprit Bumrah and Shardul Thakur — were right on the money and read the surface brilliantly. They resorted to the slower ones smartly, and used the knuckle ball from time to time. As a result, South Africa were 22 for 1 (5), and 52 for 2 at halfway stage.

(Note: Duminy later mentioned that the Powerplays for both sides went on to be the difference. India got 57 off their 6 overs, while South Africa got 25)

Hardik Pandya, the fourth seamer, carried on the good work led by the frontline pacers. He stuck to the off side, and offered nothing easy. He was duly supported by Suresh Raina. Though the latter went for some runs by dropping it short, he removed Miller (24 off 22 balls). Heinrich Klaasen took on Pandya, only to be caught at mid off. Barring Akshar Patel’s lone over — conceding 16 runs — the innings never got any impetus. However, Jonker’s whirlwind 49 off 24 balls led to a tense finish. He took on Bumrah and Shardul, accounting for 34 runs in the run-up to the final over. In the end, Bhuvi’s street-smartness prevailed. India won by 7 runs, though they were destined for a better and bigger triumph.

Put into bat, India lost Rohit Sharma early. Raina and Shikhar Dhawan gave the innings the much-needed lift. The duo lost pace with the introduction of spinners. The pitch’s actual nature was determined there and then, and India used it to their advantage later on. Though South Africa restricted the total below 180, Dinesh Karthik’s 6-ball 13 ensured the score beyond 170. His contribution proved decisive in the final outcome.

By virtue of this victory, India clinch the limited-overs leg of a highly-successful tour. India will head back home with 8 wins and only 4 defeats.

Man of the Series: Bhuvneshwar Kumar 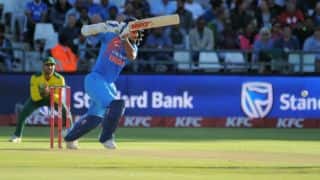