Resuming at 148 for 2 post tea break, India slipped to 156 for 5, losing Cheteshwar Pujara, Ajinkya Rahane and the debutant Karun Nair in a space of 20 odd minutes.

India suffered a middle-order collapse in the final session of the second day of their second Test versus England, which put their position in the contest in jeopardy. Resuming at 148 for 2 post tea break, India slipped to 156 for 5, losing Cheteshwar Pujara, Ajinkya Rahane and the debutant Karun Nair in a space of 20 odd minutes. England did not really have to work hard on taking out these batsmen, as a couple of bad strokes and a horrible run out in the middle ended in India losing all the advantage which they had over the touring side in this Test. Full Cricket Scorecard: India vs England 3rd Test at Mohali

The first to be dismissed was Pujara, who did not add any run to his total of 51 in the final session. On a short ball from Adil Rashid, Pujara lifted it towards midwicket looking got a boundary but there was not enough power in the stroke. Well inside the boundary, Chris Woakes took a fine diving catch which resulted in the Indian No. 3 walking back just a few minutes after play resumed. India s vice-captain Ajinkya Rahane has been out of form, and the situation was for him to make it big, however, he too disappointed.

Rahane was declared out leg-before on the fifth ball he faced. He has now scored 13, 1, 23, 26 and 0 against England in this series. Post Rahane s dismissal, debutant Karun Nair came out at No. 6 and began with a perfect cover drive for a boundary. However, a mix-up between him and captain Virat Kohli resulted in his dismissal. Nair became the 12th Indian batsman to be run out on his debut, and 147th overall in Test cricket.

After 58 overs, India were 173 for 5 with Virat Kohl and Ravichandran Ashwin at the crease. The hosts trail by another 110 runs in the first innings. 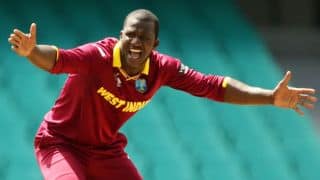