However, the Indian captain has dropped 17 spots to be 100th in the rankings. The list is headed by Barcelona and Argentina football superstar Lionel Messi.

According to the Forbes list announced on Tuesday, Kohli’s estimated earnings are USD 21 million from endorsements and USD 4 million from salary and winnings, taking his total tally to USD 25 million for the last 12 months.

Ranked 83rd last year, Kohli has climbed down to the 100th and last spot despite an increase of USD 1 million in endorsements. Messi has dethroned retired boxer Floyd Mayweather as the sports world’s highest earner, raking in USD 127 million via salary and endorsement deals.

Messi is now ahead of long-time rival Cristiano Ronaldo, the Juventus and Portugal star who is second with earnings of USD 109 million. 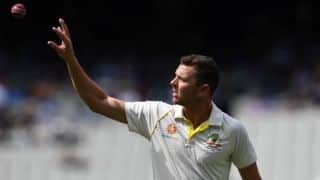 I'm just trying to pretend it's not on: Josh Hazlewood on ICC World Cup 2019