I would love to work with some of the greatest players in the world, former Australian cricketer Stuart Law said.

While the Board of Control for Cricket in India (BCCI) has been looking for a new head coach for the Indian team, it is the former Australian cricketer Stuart Law, has showed interest for the job. The 46-year old ex-Queensland batsman currently is the assistant coach of the Australia A side, that is playing the unofficial Tests against India A in Chennai. He previously coached Sri Lanka after the 2011 World Cup and then took up the Bangladesh job. He was also in charge of the Bangladesh team that made the Asia Cup final at home in 2012, losing to Pakistan. READ: Paytm win BCCI sponsorship rights for all Indian domestic and international matches till 2019

According to a report from Times of India, Stuart, who expressed his keenness towards taking up the head coach job with Indian team, said,” I would love to work with some of the greatest players in the world. I have spent quite a bit of time in the subcontinent and I know the conditions. So if anyone knocks on my door, I would be extremely happy to sit down and listen to the offer. READ: Sohail Tanvir’s 3-wicket haul propels Pakistan to 29-run win over Sri Lanka

He even suggested that the men in blue will clearly start as favorites when they tour Sri Lanka next month for the three-match Test series. “Sri Lanka are going through a rebuilding phase. So the youngsters will be eager to prove themselves. And it is always tough to beat Sri Lanka in their backyard. India, on the other hand, had not played well against Bangladesh in the recent one day series. They have got a point to prove as well. But I think India have got a fair chance to win the series.”

The tour will also be Virat Kohli’s first full-fledged series as Test captain. Stuart feels Kohli’s aggressive captaincy might make the difference. “India have a new leader in Kohli. He had led India beautifully in Australia.” READ: Virat Kohli’s decision to play for India-A justified despite low score in 1st innings 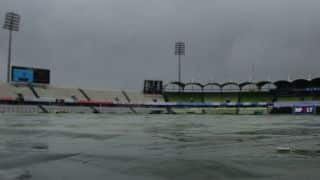 Bangladesh vs South Africa 2015, 2nd Test at Dhaka: Day 2 washed out due to rain