Sunil Valson was the only squad member not to play a game in India's historic World Cup triumph in 1983.

Sunil Valson was the only squad member not to play a game in India’s historic World Cup triumph in 1983 but a strong sense of belonging is definitely there.

He is a rare former cricketer, who is not stuck in a time-warp and is always ready to crack a joke or two at his own expense.

No wonder when he received a call just 12 days before the World Cup opener in England, he knew the reason. “I know every four years, I get these calls,” there was no sarcasm or malice but pure humour as Valson was ready to take yet another trip down memory lane on his finest hour of glory, 1983 Prudential World Cup.

So does it hurt that you were the only player among 14, who was not played in that World Cup? “Absolutely not. It didn’t hurt then when I was a youngster and it doesn’t hurt now that I am almost a senior citizen. There are 14 guys who won that World Cup and I was among the 14. No one can take that away from me,” said the former left-arm pacer, who perhaps was one of the quickest Indian bowlers of his time.

Valson was playing in England when he got the call of his World Cup selection. “I was playing in Durham West Coast League when a club official informed me of my selection. In that pre-internet era, it was difficult to confirm. I called up Kirti (Azad) who was also playing club cricket and he confirmed it. But I knew getting a chance into the first XI would be difficult,” said Valson.

However, he did play the two warm-up games at the start against Australia and minor counties. “We lost both games and one against minor county. Can you beat that? Even with little press coverage, we were taken to task but then we beat West Indies in the first game and it all changed,” recollected Valson.

Didn’t even get one hint from skipper Kapil Dev that he could play at least one game? “Yes, there was one game. The second round-robin game against West Indies which we lost (by 66 runs). I don’t remember the ground (Oval).”

“If I remember correctly Roger was having some niggle –hamstring or calf, I can’t recollect now. Kapil had said if Roger failed fitness Test, I would play. Who isn’t excited at the whiff of an opportunity?” said Valson.

But as luck would have it, Binny reported fit. “Back then, fitness test meant a round of jogging, a few sprints and a few deliveries. Jaise hi Roger ne bhaagna suru Kiya, mujhe pata thaa main naahi kheloonga (The way he ran, I knew I won’t play). Roger was in great form and it was only fair that Kapil, Roger and Madan played all games.”

“But I got a chance to get into the field as Dilip Vengsarkar was hit by Malcolm Marshall and I helped him get back to dressing room. Malcolm was unbelievable in 1983. We have never seen such quick bowling,” he reminisced.

Valson can never forget Lata Mangeshkar’s concert in Delhi which ensured that BCCI was able to reward each member with Rs 1 lakh. “It was Raj bhai (Raj Singh Dungarpur) who had requested Lata ji and what a concert it was.”

It’s not World Cup that hurts Valson but the fact that during his peak 3-4 years between 1979 to 83, he never got a chance to wear national cap despite getting wickets against touring side.

“A fast bowler’s peak remains for 3 years and if you make the highest grade, you will generally improve. You play for India, you learn more. My chance didn’t come and obviously I lost a bit of motivation.”

So how do the Class of 1983 keep in touch? “We have a WhatsApp group. Every year on June 25, people do send each other messages. Now a film (starring Ranveer Singh) is being made. It remains the finest month of my life.” 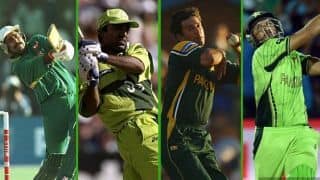