In yet another one-sided semi-final of the ICC Champions Trophy 2013, favourites India lost no sweat as they thumped familiar opponents Sri Lanka by eight wickets to set up a title clash with hosts England. 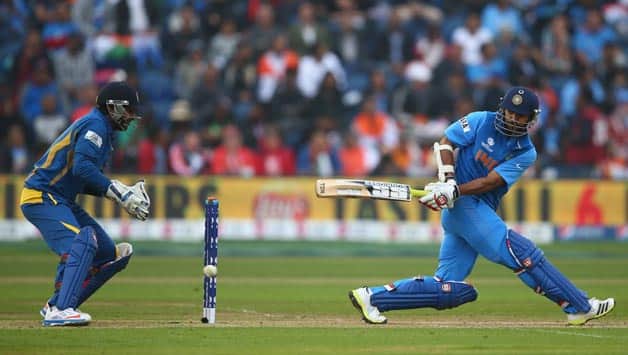 In yet another one-sided semi-final of the ICC Champions Trophy 2013, favourites India lost no sweat as they thumped familiar opponents Sri Lanka by eight wickets to set up a title clash with hosts England.

India produced an inspiring effort in bowler-friendly conditions at Cardiff to restrict Sri Lanka to 181 for eight, before their highly efficient batting line-up chased it down with 90 balls to spare.

It was another damp squib of a last-four clash, a day after England had cruised home to a seven-wicket victory over South Africa at The Oval. However, the crowd — which was considerable in number and colourful in both attire and attitude — that had turned up at the wet and chilly Sophia Gardens to watch the 45th encounter between the two Asian giants in the last five years kept themselves entertained. They danced to popular numbers played out on the stadium boombox and jogged around after forming the human snake. In between, there were a couple of pitch intrusions to provide a few moments of laughter, and Indian captain MS Dhoni drew cheers after handing over his wicketkeeping gloves to Dinesh Karthik and rolling his arms for four overs in the seamer-friendly conditions.

Earlier, rain threatened to play a dampener and delayed the start of play by half an hour. Dhoni had no hesitation giving his bowlers a chance to exploit the conditions after winning the toss. Bhuvneshwar Kumar, who had troubled opening batsmen throughout the tournament with his swing, got to bowl with the new ball, as expected. And the Uttar Pradesh lad responded in his second over itself as he had Kushal Perera (4) caught at second slip by Suresh Raina.

The amount of vicious swing that Bhuvneshwar was generating in either direction made Dhoni bowl his spearhead for nine straight overs. Bhuvneshwar maintained a flawless line throughout the 54 deliveries he bowled on the go, knowing when to swing the ball away and into the batsman like a veteran pro. He especially troubled Sri Lanka’s left-handers with the away-moving delivery and ended up conceding just 18 runs, including two maiden overs.

Meanwhile, Tillakaratne Dilshan pulled something in his leg and retired hurt on 12, further heaping the misery on the Lankans, who failed to get their run-rate past the three-runs-an-over mark until the 29th over of the innings. While that happened, Raina added two more catches to his tally at second slip, including a great diving effort to his right to dismiss the dangerous Lahiru Thirimanne (7) and a simple poucher to send the talismanic Kumar Sangakkara (12) packing. Both wickets were added to Ishant’s tally, who bowled a fuller line than his usual hit-the-deck routine. At 41 for three in 18 overs, Sri Lanka were in some spot of bother.

Former skipper Mahela Jayawardene then combined with current incumbent Angelo Mathews to try and wade Sri Lanka through troubled waters. The duo watchfully went about the proceedings and innocuously brought the run-rate above three-an-over. They got through 18 overs for 78 runs unscathed, before the mandatory Batting Powerplay struck again.

The deceptively titled bunch of five overs where the fielding team has to pack men in the circle has a dubious distinction of working in favour of the bowling side rather than the batsmen for whom it was designed to aid. Jayawardene (38) was to lose his wicket in the second over of the Powerplay to the equally deceiving spin of Ravindra Jadeja. The wicket was followed by 16 straight dot balls as India tightened their grip on Sri Lanka’s throat.

Mathews went on to score a half-century — his first since January this year — as the Lankans sauntered on. He was dropped in the deep by, surprisingly, Virat Kohli, before Bhuvneshwar made up for his teammate’s error with an easy catch at cover as Mathews went for the slogs in the death overs.

Dilshan limped back onto the field after Sri Lanka were reduced to 164 for seven with two overs to go. He tried his best to get as many runs as possible for his team, even going for reverse sweeps on one good leg. But the Lankans couldn’t cross the 200-mark, as the Indians walked back to the pavilion a happy bunch for a well-earned break.

Shikhar Dhawan and Rohit Sharma were off to a cautious start in the chase, which was against the trend they had set in this tournament. While the first 10 overs against South Africa, West Indies and Pakistan had yielded 53, 66 and 57 runs respectively, they managed just 41 today against Nuwan Kulasekara and Lasith Malinga.

However, even within that period, Dhawan played a couple of shots that showed exactly why he has won so many fans in the last three months ever since that record-breaking 187 on Test debut against Australia at Mohali. Malinga probed the Indians with stinging deliveries in the block-hole zooming towards middle stump; one such delivery was dispatched through the covers by Dhawan with such nonchalance that it drew a smile from the bowler’s face, who never holds back from appreciating a good shot. Another delivery, a short-pitched one, was upper-cut over the jumping third-man for six. These shots of brilliance were peppered among numerous edges and deliveries that just beat the blades of the two Indian batsmen by a few millimetres.

After the 10th over, however, the duo opened up a bit, especially Rohit who played his trademark back-foot cover drives and pulls for four, as the fourth straight 50-plus stand between them was brought up. It wasn’t the prettiest of their four partnerships so far, but it was effective as ever — the lynchpin of India’s flawless progress to the final.

At the end of the 17th over, with 105 needed from a leisurely 33 overs, Rohit proved exactly why he hasn’t risen to the heights expected from his prodigious talent. The first drinks break had just been taken and there was a break in momentum, but that did not warrant Rohit coming down the track trying to loft Mathews over mid-off. The 26-year-old completely missed the ball as it went on to clip the bails and dismiss him for a promising 33.

Dhawan, meanwhile, gave his chances to the Lankans as well, and was dropped as many as three times. Two of those chances were difficult ones, but the one that flew straight to Mathews in the slip cordon when Dhawan was on 18 should have been taken. But then, Dhawan deserved the bit of luck given the form he has been in. He has unarguably been the most attractive, prolific and lethal batsman in this tournament and added 68 runs to his overflowing tally (332 runs in four matches) before being smartly stumped by Sangakkara.

Dhawan was to fall with 40 runs more to win. In the end, it turned out to be a stroll in the park for India’s equally adept middle-order as Virat Kohli (58 not out) finally got some runs under his belt and took India home alongside Raina (7 not out).

The man-of-the-match award was given to Ishant, who took three for 33 and was the pick of India’s bowlers. Offie Ravichandran Ashwin picked up three wickets as well and India would be delighted with their all-round performance heading into Sunday’s final.

Man of the Match: Ishant Sharma