India beat West Indies by an innings and 51 runs in the first Test at Kolkata. On Day Three, West Indies resumed their second innings 219 runs behind and were bowled out for 168. It was due to Mohammad Shami's spell that India sealed victory during the evening session Day Three. 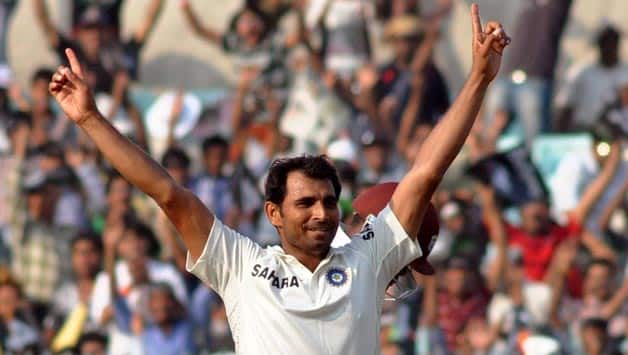 India beat West Indies by an innings and 51 runs in the first Test at Kolkata. On Day Three, West Indies resumed their second innings 219 runs behind and were bowled out for 168. It was due to Mohammad Shami’s spell that India sealed victory during the evening session on Day Three.

Sachin Tendulkar bid goodbye to the Eden Gardens with this victory, but the fans would be disappointed as they watched him bat only once during the game.

The Indian debutants were the stars as Rohit Sharma’s 177 helped India recover from a tough situation during their only innings and Mohammed Shami’s reverse swing rattled West Indies in both the innings. Not to forget Ravichandran Ashwin’s all-round contribution — 124 with the bat and a total of four wickets in the match.

West Indies had won the toss and chosen to bat first on a good batting track. India handed caps to Shami and Rohit, whereas Sheldon Cottrell was the new man for West Indies.

Early on Day One, Shami Ahmed and Bhuvneshwar Kumar bowled a good spell and accounted for the openers. Shami got Powell with a rising delivery and that was his first Test wicket.

Marlon Samuels rebuilt the West Indies innings with a fluent display. He was using his feet to the spinners, going inside out, essaying crisp shots all along. However, Shami came along at 138 for two and unleashed his reverse swing. The ball came back into Samuels and shattered the stumps. Denesh Ramdin followed soon. Thereafter, West Indies merely collapsed to 234. Sachin Tendulkar also chipped in with the wicket of Shane Shillingford.

India started Day Two at 37 for no loss but were rocked by Shane Shillingford’s burst. The offie deceived the Indian batsmen with his doosras and some prodigious turn as they were left shell-shocked. The crowd favourite Tendulkar also fell to him and there was some outrage as the umpire Nigel Llong got the decision wrong.

But, then walked Rohit for his first Test innings at 82 for four and looked in complete control. After the fall of Virat Kohli, he took on the West Indies bowling with skipper Mahendra Singh Dhoni. However, India looked in complete command when Ashwin and Rohit came together. In tandem, they smashed the West Indies attack, essaying classy shots all along. Rohit became the 14th Indian batsman to get a century on Test debut and India finished Day Two at a comfortable 120 runs ahead. Rohit was on 127 and Ashwin on 92.

Early on Day Three, Ashwin completed his ton and Rohit carried on from where he left off. However, on 177, he padded one from Veerasammy Permaul and although it looked like it wasn’t going to hit the stumps, the umpire gave him out. Ashwin was bowled by Shillingford for 124 and he got his fifth wicket. After that, India were bowled out for 453.

West Indies started their second innings on a positive note with Chris Gayle smashing a few boundaries. However, a lot of their batsmen got starts, but could not convert them. Kieran Powell and Darren Bravo also got in the 30s, but West Indies lost wickets in a heap. Shami Ahmed was in great form as he accounted for the wickets of Samuels, Ramdin, Shillingford and Darren Sammy. The game chaging over came in the evening on Day Three as India picked three wickets, two of them bowled by Shami and one was run-out. Shami completed the match with another reverse swing smashing Sheldon Cottrell’s stumps.