Colombo: Independence Day celebrations were dampened on Saturday by India‘s shocking 63-run defeat to Sri Lanka in the first Test played at Galle. Chasing 175 runs for victory, Virat Kohli‘s team were bundled out for a paltry 112 runs in 49.5 overs. On Saturday, few would have thought that India would lose the first Test by such a huge margin after taking a first innings of lead of 192 runs. Replying to Sri Lanka’s massive second innings score of 367, which was all due to an unbeaten 162 by middle-order batsman Dinesh Chandimal, Indian batsmen fell like nine pins against the left-arm guile of spinner Rangana Herath, who claimed seven wickets for 48 runs. Sri Lanka’s other spinner P Kausal claimed three wickets for 47 runs. Angelo Mathews speechless following victory over India in series opener

For India, Ajinkya Rahane and Shikhar Dhawan top-scored with 36 and 28 respectively. The next highest score was by leg spinner Amit Mishra (15). Virat Kohli and Rohit Sharma, the other recognised batsmen in the squad scored three and four respectively. Dinesh Chandimal was declared Man of the Match for his swashbuckling 162 not out. Virat Kohli disappointed with poor batting show by India 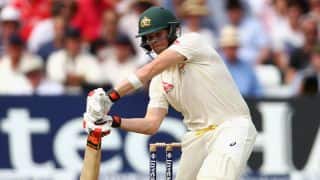 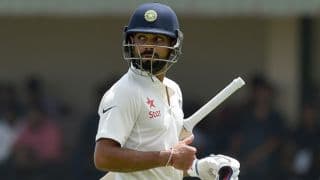