India needed just three wickets in the second session of the final day to win the match.

India went 1-0 up in the five-match series with a 246-run win over England in the second Test at Vishakhapatnam. India needed 3 more wickets to win in the last two sessions, and did not break a sweat in achieving that. England a mere 16 runs and lost 3 wickets in the second session to get bowled out for just 158. Set 405 runs to win the match, England got off to a god start with openers Alastair Cook and Haseeb Hameed putting up 75 for the first wicket the previous evening. England had lost two wickets in quick succession at the end of Day Four, which gave India the advantage going into the final day of the match. Full Cricket Scorecard: India vs England 2nd Test at Visakhapatnam

Ansari was the first wicket to fall after lunch, bowled by Ravichandran Ashwin. The ball spun from outside leg, kept low and crashed into Ansari s off stump, giving Ashwin his third wicket of the innings to go with his 5 in the first innings. Stuart Broad, been ruled out of the third Test at Mohali, joined Bairstow. Bairstow gave the English fans something to cheer about, cutting Jayant Yadav to the fence off the third over of the session. Broad, however, did not offer much resistance as he was trapped leg before by Jayant, missing a sweep after playing the same shot to get a boundary off the previous delivery. James Anderson was dismissed off the very next delivery, leg-before to Jayant. The umpire had ruled him not out, but India opted for DRS, and ball-tracking showed that the ball would have crashed into the leg-stump.

The track was not a typical Indian Day Five track with a lot of turn. True, it was uneven and the odd one turned. In a quest to block themselves to safety, England lost as many as 5 wickets in the first session of Day Five. The first to go was Ben Duckett, dismissed for a 16-ball duck, caught by Wriddhiman Saha behind the wicket off Ashwin. India got the big wicket of Moeen Ali next. The ball took the inside edge and carried to Virat Kohli, who was waiting at leg-slip. Kohli dropped Joe Root when he was on 9. He dove full length at leg-slip, but he could not hang on to it with just one hand for his balance had already shifted the other way. Root was however given out caught-behind off Ashwin, but he immediately reviewed and the decision was overturned.

India took the new ball immediately and that gave India more wickets, this time to Jayant Yadav and Mohammed Shami. Jayant bowled an absolute peach to remove Ben Stokes, top-scorer of the first innings. Shami, fast, hostile and accurate, dismissed Joe Root for 25 off the last ball of a fantastic over. The double blow finally tilted the match India’s way, and it was only a matter of time from there. FULL Cricket Updates: India vs England 2nd Test, Day 5 at Visakhapatnam

Earlier on Day One, India had won the toss and elected to bat first. India scored 455 in their first innings, Kohli top-scoring with 167. Cheteshwar Pujara scored 119, his third ton in as many matches, while Ashwin chipping in with 58 and Jayant playing a useful hand. With 3 wickets apiece, Anderson and Moeen were the pick of the bowlers for England. England were bowled out for 255, which gave India a 200-run lead despite Kohli’s 81 and Jayant’s second crucial innings of the match. England did extremely well to ensure that India do not run away with the game. Broad and Rashid picked up 4 wickets each to ensure that India were bundled out for just 204, with Kohli top-scoring once again with 81.

Kohli was named Man of the Match for his superlative effort. England will be without Broad at Mohali, which will probably give Chris Woakes another chance. 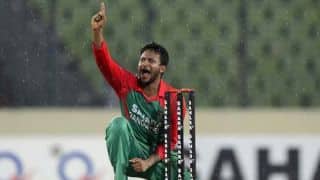