India drew with Sri Lanka Board President XI after dominating the tour game for a long time.

The three-day tour game between India and Sri Lanka Board President XI starting August 6, 2015 ended in a draw after Sri Lanka Board President XI batsmen played well to ensure they did not collapse like they did in the first innings. It was the pair of Kaushal Silva and Upul Tharanga, both of whom scored fifties to ensure the hosts were steady after losing Lahiru Thirimanne and de Silva early in the innings. India though did not give up without a fight. R Ashwin did threaten taking three quick wickets in a quick time but the hosts fought it out to earn a draw. The players shook hands with the score of 200 for six at the end of 54 overs.

For India, it was the pair of KL Rahul and Cheteshwar Pujara who did the scoring to take them past  the total of 100 after the experiment of opening  with Virat Kohli and Rohit Sharma flopped big time. Saha failed at number three and India went for runs on Day Three and managed to get bowled out after taking the lead past 400. Live cricket updates: India vs Sri Lanka Board President XI, Day 3, Colombo

On Day Two, Ishant Sharma’s 5 for 23 had the Sri Lanka Board President bowled out for a score of mere 121. Ishant who took five wickets in space of 21 balls for just four runs to reduce the hosts to 10 for five at one point of time. Varun Aaron then took a couple of wickets to give India firm control. The pair of Danushka Gunathilaka  and Nirsoshan Dickwella threatened to take the game away but the Indian spinners did the job to bowl them out for a score of 121; handing India a lead of 230 runs. Read:Ishant Sharma takes 5 wickets in 21 balls against Sri Lanka Board President XI

Earlier on the second day, India were bowled out for a score of 351. It was the stand between Shikhar Dhawan and Rahul that gave India the platform of 108 runs. The middle order though collapsed but India found a saviour in the form of Ajinkya Rahane. Rahane notched up a fine 109 to help India get past 300 with Pujara who chipped in with a fine score of 42. India though will rue not converting starts in the game. Read: India 314/6 at stumps, Rahane scores hundred, Kohli flops on Day 1 India vs Sri Lanka President XI, India tour of Sri Lanka 2015

Rahul missed out on his fifty and Rohit Sharma did not last long in the first innings. Virat Kohli came in and had a troubled time, he was bowled off a no ball as well. He was eventually caught trying to go after one outside off. India were in trouble at 133 for the loss of four wickets but then Rahane scored a brilliant 109. Dhawan earlier scored his 27th First-Class half-century. Rahane  retired on his overnight score of 109 and wickets then fell in a flurry for India on the second day. Kasun Rajitha finished with 5 for 68 for the hosts. Read: Ajinkya Rahane credits positive mindset after scoring ton in India’s tour match vs Sri Lanka President’s XI 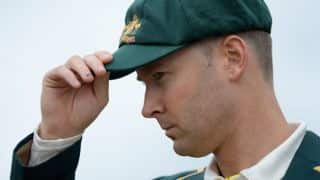 VIDEO: Michael Clarke cries while talking about his retirement from international cricket, after Australia lose Ashes 2015 to England