India finished on 37 for no loss on Day One of the first Test against West Indies at Eden Gardens, Kolkata. Earlier, Shami Ahmed’s spell had restricted West Indies to 234 after the visitors had won the toss and elected to bat first. 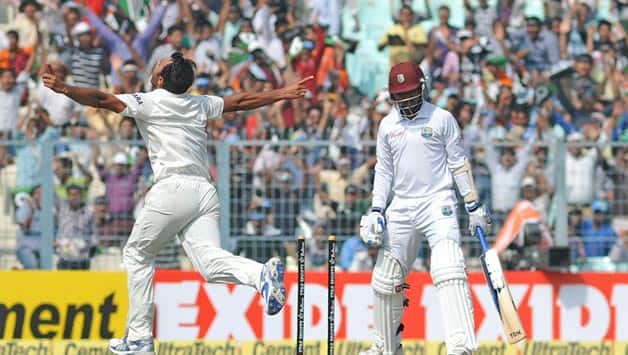 India finished Day One of the first Test against the West Indies on 37 for no loss at the Eden Gardens, Kolkata. Earlier, Shami Ahmed’s spell had restricted West Indies to 234 after the visitors won the toss and elected to bat first.

Shami put in a magnificent display of swing in the afternoon. Starting the afternoon session on a comfortable 107 for two, West Indies lost their way and ended up losing four wickets.

Samuels started the session in style as he drove Pragyan Ojha through the covers for four. He then got to his half-century off only 61 balls. However, his dismissal sparked a middle-order collapse. Shami’s reverse swing troubled the batsmen.

Shami got one to pitch on good length and the ball came back into Samuels, who was locked to his crease and couldn’t get the bat down in time. In the next over, Darren Bravo worked Ravichandran Ashwin to the leg-side and ran. Shivnarine Chanderpaul sent him back as Shami collected the ball and threw it to Dhoni to find the batsman short of the crease.

Ashwin could have had his wicket as Denesh Ramdin edged his first ball to the slip fielder, but it fell a bit wide and trickled to the boundary. But, Shami was on show at his home ground! Ramdin was dismissed off a delivery similar to the one that got Samuels.

In walked Darren Sammy and he essayed a few confident shots to get into his rhythm. Chanderpaul too eased in with a few cover-drives off Shami. However, Sammy’s attacking instinct got the better of him as he tried to clear Pragyan Ojha despite Bhuvneshwar Kumar being placed at long-off. As a result, the West Indies captain only managed to offer him a catch. From 138 for two, West Indies had slipped to 172 for six.

After tea, Veersammy Permaul fell to Ravichandran Ashwin after essaying a few good cover-drives. Once Chanderpaul was dismissed, Shami finished the innings by bowling out Sheldon Cottrell.

The Indians started their innings in confident fashion as Shikhar Dhawan and Murali Vijay essayed a few confident strokes to get them going. Cottrell was on show and he showed he has pace, but wasn’t finding his line.

India would resume on Thursday, possibly in front of a big crowd, who would come to watch their hero in action.