Ravichandran Ashwin took 3 for 15 to break the back of the Sri Lankan batting.

India absolutely dominated Sri Lanka in the morning session of Day One of the first Test at Galle. Ravichandran Ashwin snared 3 for 15 before lunch while Ishant Sharma and Varun Aaron struck once each. After the pacers reduced Sri Lanka to 15 for 2, Ashwin came to the party and wrecked Sri Lanka, taking three cheap wickets to leave the hosts reeling at 65 for 5 at lunch. Angelo Mathews — playing his 50th Test — and Dinesh Chandimal were the unbeaten batsmen at lunch as India had the Lankan batsmen firmly on the back foot. Mathews was unbeaten on 26, but only one other batsman even got to double figures. Live Scorecard: India vs Sri Lanka 2015, 1st Test at Galle, Day 1

Ishant was tight with the new ball, getting impressive carry from the start. He bowled seven overs for as many runs and took a wicket as well. Aaron was a bit wayward at the start but came back well to take a wicket also. Dimuth Karunaratne was the first man to go, edging an Ishant short ball to Ajinkya Rahane at gully for 9. Two balls later, Aaron had Kaushal Silva caught by Shikhar Dhawan at slip for 5. Replays showed that the ball went off Silva’s shoulder rather than the bat, but the batsman had already enjoyed a slice of luck after Dhawan had dropped him off Aaron earlier in the day. Live Updates: India vs Sri Lanka, 1st Test at Galle, Day 1

At 15 for 2, Lahiru Thirimanne was joined by the man of the moment, Kumar Sangakkara. However, Ravichandran Ashwin rained on his parade, getting Sangakkara to hit one straight to KL Rahul at silly point for just 5. Ashwin struck two more times after that, first getting Lahiru Thirimanne caught by Rahane at slip, and then dismissing Jehan Mubarak, a man whose Test average is under 20, for a duck. READ: Angelo Mathews plays 50th Test in India vs Sri Lanka 1st Test at Galle

Earlier, Sri Lankan skipper Angelo Mathews won the toss and elected to bat first against India. Sri Lanka went in with a similar side that took on Pakistan in the Test series, with Jehan Mubarak retaining his place, and Rangana Herath making a comeback. Meanwhile for India, the injured Murali Vijay was replaced by KL Rahul, while all three spinners — Ravichandran Ashwin, Harbhajan Singh, and Amit Mishra — got to play with Varun Aaron and Ishant Sharma being the two pacers. READ: Kumar Sangakkara’s chances of fairytale ending seem bleak 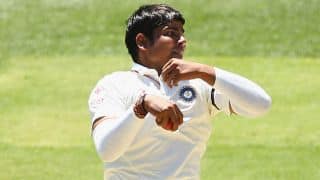