Colombo: Off-spinner Ravichandran Ashwin took five wickets to trigger a Sri Lanka batting collapse as India won the second Test by 278 runs in Colombo on Monday to level series. Sri Lanka, who began the final day’s play at 72 for 2 chasing a victory target of 413 runs, lost their last eight wickets for 62 runs and were all out for 134 shortly after lunch at the P. Sara Oval. Ashwin finished with five for 42 and a match haul of seven wickets. The defeat denied retiring Sri Lankan great Kumar Sangakkara a fairytale farewell in his last international match. He had been dismissed for 18 on Sunday. Sri Lanka had won the first Test in Galle by 63 runs. The third and final Test starts at the Sinhalese Sports Club in the Sri Lankan capital on Friday. READ: Ravichandran Ashwin helps India rout Sri Lanka, level series with 278-run win in 2nd Test at Colombo

Off-spinner Ravichandran Ashwin caused a dramatic Sri Lanka collapse, grabbing a five-wicket haul as Sri Lanka, set an improbable victory target of 413 runs, slumped to 130 for 9 in their second innings by lunch on the fifth day at the P Sara Oval. The hosts lost seven wickets for 56 runs after resuming at 72 for 2 before heavy rain stopped play just before the end of the morning session. Light rain between spells of dry weather has been forecast for the rest of the day which should give India enough opportunity to wrap up the match. READ: Kumar Sangakkara: The master and his legacy

The impending defeat will deny retiring Sri Lankan great Kumar Sangakkara a fairytale farewell in his last international match. The left-hander was dismissed for 18 on Sunday. Sri Lanka lost captain Angelo Mathews off the first ball of the day, edging fast bowler Umesh Yadav to stand-in wicketkeeper KL Rahul, who dived to his right to hold a low catch. First Test hero Dinesh Chandimal began by hooking seamer Ishant Sharma for a six, before he was bowled round his legs by spinner Amit Mishra for 15 to reduce the hosts to 91 for 4. READ: Kumar Sangakkara vs Ravichandran Ashwin: The final four dismissals of the legend’s career

It soon became 111 for 6 as India grabbed two more wickets in the space of five deliveries. Ashwin had Lahiru Thirimanne snapped up at silly point by substitute fielder Cheteshwar Pujara, and in the next over Ishant Sharma forced Jehan Mubarak to edge a catch to second slip. The procession back to the pavilion continued when Dhammika Prasad attempted to loft Ashwin out of the ground, but only managed to top-edge a catch to Mishra at mid-on. Sri Lanka’s last recognised batsman Dimuth Karunaratne was bowled by Ashwin for 46. Sri Lanka lead the three-match series, having won the first Test in Galle by 63 runs. READ: Kumar Sangakkara and that cover drive: A match made in cricketing heaven 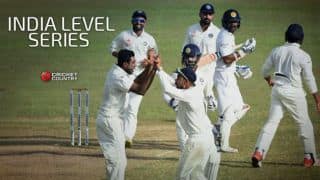