Powered by Bhuvneshwar Kumar and Yuzvendra Chahal, India rocked New Zealand batting and inhibited them to 230 for 9.

India squared three ODI-series 1-1, beating New Zealand by 6 wickets in the second ODI, at Maharashtra Cricket Association Stadium in Pune. In the 100th ODI between these sides, India registered their 50th win against New Zealand.

Powered by Bhuvneshwar Kumar and Yuzvendra Chahal, India rocked New Zealand batting and inhibited them to 230 for 9. In reply Shikhar Dhawan played a responsible innings of 68 runs. Dinesh Karthik and Hardik Pandya then took care of rest of the proceedings.

No hit for Rohit

It had finesse painted on it. Rohit Sharma could not have timed the pull better. After being cautious against Trent Boult, Rohit finally got a loose delivery, and went for it. And why not? In the five encounters between them Rohit had given away his wicket thrice, scoring 24 runs.

For that matter the target was not daunting. Rohit had enough time to accumulate runs to reach the finish line. But Rohit continued being Rohit. It was Tim Southee s half-volley on leg-stump that did the trick. On another day Rohit would have nicely manoeuvred it down the ground. It was in the slot. But Rohit found Colin Munro at square-leg.

The placards reading KING KOHLI were immediately raised as Rohit walked back and the Indian captain arrived at the crease. Virat Kohli started with a flick for two. He followed it with a resolute on-drive for four. The pitch agreed with his style of play.

Kohli executed a pull to Rohit’s, except that he swirled entirely after timing it. He could not have been in better control. No one could have been.

You do not think of Kohli getting dismissed. More often than not he scores bulk of the runs. Today, however, was not that day for the Virat show. After compiling an attractive 29, he tried to cover-drive off the front foot. Given that he does not play with a high elbow and his front leg often pushes him to play through cover, Kohli created a faint edge to the wicketkeeper.

The man of the moment, however, was Shikhar Dhawan. He scythed anything short, even the ones that were hurled close to his body. And when pitched under the bat, the Gabbar showed no mercy and dispatched it over the infield.

India lost two wickets. In came Karthik to partner Dhawan. India needed another 151 runs. Although Karthik is senior to Dhawan, the former has been in and out of the team. Dhawan remained in control and raced to his 22nd fifty. However, he played a rash shot to cut short the long innings. Against the pace of Adam Milne, he shimmied down only to mistime a short delivery and find Ross Taylor at cover.

India have been often shuffling theirs batters. In the last match Kedar Jadhav had batted at No. 4 and failed. This time Kohli promoted Karthik. He had failed to score a fifty at Mumbai but had added vital runs with Kohli to steady the innings. He did the same at Pune. This time he remained unbeaten on 64 and saw India through.

Blessing in disguise for India

New Zealand squandered big time. The track, in the previous two matches, had garnered in excess of 300 runs as many as thrice. However, Bhuvneshwar and Jasprit Bumrah applied themselves better than what they had at Mumbai. Bhuvi got rid of the openers while Bumrah caught the all-important Kane Williamson in the crease.

No sweep for Latham today

Latham lost his middle-order partner Ross Taylor early, to Hardik Pandya. New Zealand were 58 for 4, but Latham kept his cool. His temperament almost created an encore of his previous performance, but Latham planted his front foot far away from off stump to execute a sweep. It was the angle from which Akshar Patel bowled that foxed Latham. Coming around the wicket, Akshar hit middle and leg.

Kedar bowled the 11th over and went on to complete a 7-over spell. He did not take a wicket, but the rate at which he bowled without conceding runs choked New Zealand and gave India the momentum to restrict New Zealand. In all his figures read 8-0-31-0.

Colin has a grand party

With a big backlift and rubbery wrists, the fours and sixes Colin de Grandhomme hit were a delight to watch. Those strong forearms allowed him to cut without arching his back, while he easily flicked over mid-wicket with the back leg in the air. His knock was the highlight of the innings. The commentators could not hold themselves back from singing his praises.

Although Henry Nicholls (42) was the highest run-scorer of New Zealand’s innings, de Grandhomme gave some momentum with his brisk innings.

Bhuvi was the pick of the bowlers, taking 3 for 45. Meanwhile, Chahal and Bumrah took 2 wickets each. It was the India bowling unit that set up the foundation for a clinical win.

Player of the Match: Bhuvneshwar Kumar 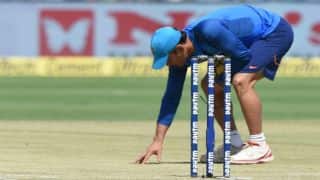