The first Test between India and England at Trent Bridge ended in a draw as the visitors defied a nervous start on the fifth day and batted to safety. It was a Test where the lower order shined for both teams and witnessed record 10th-wicket stands. And it was a fitting end as India’s 10th wicket stand remained undefeated in the second innings. On a batting paradise, the Test seemed destined to end without a result, however, a bit of drizzle on the fifth morning and nervous start from India ensured there was an exciting finish on the cards. Ultimately, it was a solid fifty on Test debut from Stuart Binny which rescued India.

Despite the dull wicket, each day of the match had something interesting to offer. The essence of Test cricket is the way each team manages to wrest control yet can’t hold on to it for long. A brilliant display of batting by Murali Vijay on the first day was followed by England running through the lower order on second. What followed was the first of the two quality 10th-wicket partnerships. Mohammed Shami (51 not out) and Bhuvneshwar Kumar (58) added 111 for the last wicket to take India to 457. In reply, England, reeling at 202 for seven gave India a taste of their own medicine as Joe Root (154 not out) and James Anderson (81) added a world record 198 for the last wicket. In the process they also shattered many more 10th-wicket records with the No 11 scoring his personal best and the third highest at that position. Root scored his fourth Test ton, an innings which assures England a long-term No 4 in Tests. England had taken a handy lead of 39 and from thereon only one team could lose — India.

With the wicket giving no assistance, India were cruising along on the fourth day. Vijay was once again in the thick of things scoring another half century while Cheteshwar Pujara got his fifth Test fifty. What looked like a match heading to a dull draw was lightened up by two quick wickets late in the day.

India went in to the final day with a tricky situation of batting for time and runs. If they had managed to achieve at least one of it, things would have looked safe. But the dismissals of three middle-order batsmen unsettled the visitors. The wicket changed the course completely after brief showers. The experienced duo of  Anderson and Stuart Broad were looking threatening again with the ball reversing. England in the second innings had a set plan and looked more organised in their attack. Kohli was tested with balls coming in a long way thanks to reverse swing. A wicket was all England needed to pressure India and Broad struck twice. The pressure only increased when MS Dhoni was castled by Liam Plunkett. England looked all set to run through under overcast conditions. It was left to the dodged resistance of Binny and Ravindra Jadeja to steer the team to safety. The latter played the longest Test innings of his career. The duo shared a partnership of 65 runs which bailed India out.

Everytime India lost a wicket, England started feeling more optimistic about a victory. In the end result, the contribution from Binny and Jadeja will be under-rated. It was all about handling the pressure. Three solid middle-order batsmen failed to do what the duo managed to and shepherded India to safety. Even when Jadeja was dismissed with the new ball for 31, England had a slim hope. But that was crushed by Binny’s innings. After the two teams had batted once, Binny’s place was in question and with this 78-run innings he will be a certainty in the Lord’s Test.

At tea, India had ensured that there was nothing more than a draw ahead. Bhuvneshwar accomplished a unique achievement of being the only one to score two fifties and pick a five-for in a Test. This was his first test match overseas. Towards the end, Alastair Cook brought himself on and had good fun mimicking Bob Willis. He even got the wicket of Ishant Sharma. That explains the irony of the match where the bowlers scored runs and a batsman got wickets. Overall it was a Test where the scorecard won’t indicate the seesaw battle witnessed across five days. It was Anderson who bagged the Man of the Match for four wickets and the record 81.

There were a lot of positives or both teams. India have looked solid with the bat in overseas conditions and the pacers have shown great promise. Whereas, England are in search of a quality spinner and the batting has looked settled except that the middle-order hasn’t fired collectively. The biggest Test is of course for Cook, still searching for runs. On the captaincy front he looked more proactive in India’s second essay and many of his ploy worked.

The second Test will begin in four days at the iconic Lord’s. England have already included left-arm spinner Simon Kerrigan in their 14-member squad for the next Test. Meanwhile, Dhoni will be scratching his head about Ravichandran Ashwin’s inclusion. The off-spinner can’t take Binny’s place and now it has to be either a pacer or Jadeja’s spot. 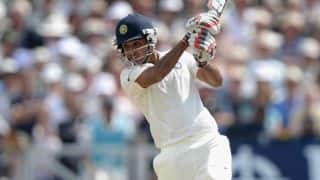