India and England cricket teams arrived in Chandigarh to play the third one-dayer of the five-match ODI series at Punjab Cricket Association (PCA) stadium in Mohali on Thursday. 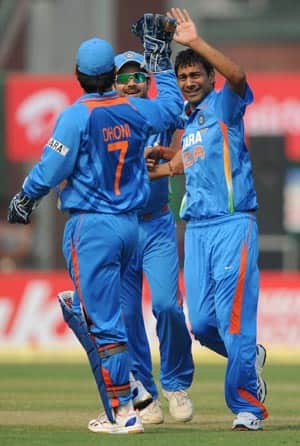 India and England cricket teams arrived in Chandigarh to play the third one-dayer of the five-match ODI series at Punjab Cricket Association (PCA) stadium in Mohali on Thursday.

The players of both the sides arrived here by a chartered flight and were straight away escorted to their team hotel under a thick blanket of security.

The hotel has an unprecedented security cover with city police chief Naunihal Singh himself taking the stock of security measures of the place.

The hotel is also all ready with its menu.

With most of the tickets already been sold out, the 28,000-capacity picturesque PCA stadium is likely to witness a thrilling encounter as England team would be desperate to save the series, while the hosts would be looking to seal the five-match series here itself by taking an unassailable lead.

England were completely outplayed in their first two ODIs by India in Hyderabad and New Delhi.

Meanwhile, the PCA pitch curator Daljeet Singh said that the track on which the match will be played would be a typical Mohali wicket.

“The pitch will have lot of bounce and it will be pacer friendly,” he said.

The teams will have a net practice tomorrow at the PCA stadium.

The last time Mahendra Singh Dhoni’s men played here was in the World Cup semi-final against Pakistan in March.

To ensure adequate security, Punjab police will be using the mobile explosives detectors that it received from the Centre for the World Cup semi-final, the officials said.

The police will be using 18 mobile explosive detectors for the match, which will be placed at all the gates of the stadium. These detectors can also check any narcotics being carried inside the venue.

A three-tier security system will be provided with 1200 policemen deployed for security and law and order purposes, including a Quick Reaction Team (QRT) and sharp shooters on building roof tops around the stadium, police said.

To keep the activities in and outside the stadium under scanner, 70 close circuit television cameras are positioned at strategic locations. (PTI)