Ashwin may continue to sit on the bench.

The simmering row involving James Anderson and Ravindra Jadeja has added some spice to the series as India and England gear up for the second cricket Test at Lord’s where a lively wicket is expected to welcome the two teams at Lord’s on Thursday.

As if the ‘lifeless’ wicket at Nottingham was not enough, the alleged altercation between the two players has marred the start of the five-match series.

A date for hearing has not been finalised as yet which means Anderson is sure to play and the incident is bound to have a bearing when the two teams square up.

International Cricket Council (ICC) has charged the home pacer Anderson for pushing and abusing Jadeja during the lunch break on the second day of first Test. If found guilty he could miss at least two and up to four Tests or up to eight One-Days Internationals (ODIs), something that the hosts will not desire under any circumstances.

The England & Wales Cricket Board (ECB) has retaliated with a report against Jadeja as well. As much as the English team management will be lobbying hard for the leader of their attack, they will also be keeping an eye on the pitch for the game.

Two days ahead of the match, the centre-wicket at Lord’s bore a distinctive green tinge. Much of it is expected to disappear by time of the toss on the first morning. Even so, it is possible that the wicket will retain some juice in it, thanks to this delayed shaving.

It will be joyous news for the quicker bowlers on both sides then, a sort of reward for the hard work they put in during the Nottingham game.

At the same time, such a scenario will also be in keeping with how Tests at Lord’s have panned out in recent times. The average first-innings score at this ground historically is 315 runs, but from 2010 until 2014, it has gone up to 403. The fact that this is the only ground that hosts two Tests in an English summer helps of course.

And so, skipper Alastair Cook would be confused. At the one hand he will want a placid track to reverse his batting fortunes. From becoming his nation?s top century-getter in Test cricket to not scoring in three-figures for the last 25 innings, it has been a steep decline for him.

While he will want a little less hard work even against a mediocre Indian attack, at the other hand he will also desire more assistance for his bowlers as England continue their search for an end to their nine-match winless streak.

He will feel happier with the finer print that is in the bowling figures at Lord’s. Pace bowlers have found a lot of success here in recent times. If the period from 2008-2014 is considered, they have taken 165 wickets at an average of 21.95 in comparison to the spinner’s figures of 69 wickets at 29.28.

The faster bowlers’ figures are even more impressive when compared with the period from 2000-2007 wherein they took 145 wickets at an average of 27.68.

The distinctive slope at this famous ground perhaps plays to their advantage. Any which way, it can be assumed that spin will not be a major factor in this Test unless something extra-ordinary happens to the pitch over the course of five days.

As such then, England will not be playing left-arm spinner Simon Kerrigan, who is as it is considered a long-shot given his disappointing debut in the Ashes last year. He is said to be in the squad to begin his reintegration to the Test format.

For India, meanwhile, perhaps this puts to rest the question of playing two spinners. At Trent Bridge, the 198-run world-record 10th wicket stand between Anderson and Joe Root notwithstanding, the Indian bowlers gave a fairly good account of themselves.

Indian skipper MS Dhoni likes to think of international cricket as a process and in that respect his inexperienced bowling attack did graduate from the way they bowled in the two practice games at Leicester and Derbyshire.

Meanwhile, the six-batsmen-line-up too performed satisfactorily and merits another go as the Indian team searches for a first overseas Test win since 2011. Perhaps the only selection dilemma facing Dhoni ahead of this Test will be regarding who his fourth and fifth bowlers should be.

The summation of spinners’ disliking for Lord’s and Stuart Binny’s match-saving maiden fifty at Nottingham means that the all-rounder will be in the playing eleven.

Inadvertently it means a toss-up between Ravichandran Ashwin and Ravindra Jadeja. The former had a lengthy bowling spell in the nets, while the latter batted, bowled and took slip-catching practice, going through a proper pre-match work-out.

This Indian team management doesn’t tinker around with its combination too much, certainly not when they have come away from the first Test with the series still poised nil-nil.

There is every reason to expect that Ashwin will continue to sit out with Jadeja continuing in the role of the lone spinner. Whether their roles should be switched is a debate for another day, perhaps the end of this second Test match. 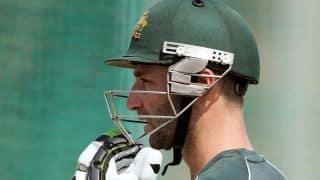