Angelo Mathews scored his sixth Test ton and fifth Test ton as a Test captain for Sri Lanka in 2nd Test at Colombo.

At Tea, on Day Three of the second Test between India and Sri Lanka at P Sara Oval Colombo. Sri Lanka started the post lunch session in an positive manner but the Indians managed to hold them back. Sri Lanka are 298 for 7 at the tea interval, trailing India by 95 runs. After not taking any wicket in the first session on Day Three India took as many as four wickets . It was a superb comeback from India since Sri Lanka were looking set to run away with the game with their captain going great guns. Live cricket score India vs Sri Lanka 2015, 2nd Test at Colombo, Day 3

Angelo Mathews started the post lunch session in an aggressive manner hitting Ishant Sharma for three fours in a row. Lahiru Thirimanne scored his fourth Test fifty and added 127 runs with Mathews before getting caught behind to Ishant Sharma for 62. The rain halted the proceedings for sometime and India made full use of it to take out the wicket of Dinesh Chandimal for a score of 11. Mathews though continued to be impressive and registered his sixth Test ton, his fifth as a captain.

Indian then struck with the quick wickets. Stuart Binny took hi maiden Test wicket when he had Mathews caught at first slip by Murali Vijay for 102. Amit Mishra then came in and took out Dhammik Prasad who registered his 50th Test wicket. Sri Lanka still trail India by 95 runs and will want to get get as many runs as possible in the last session. India will hope to wrap up the tail and get batting on what still seems to be a good deck for batting. Read: Angelo Mathews dismissed after scoring 6th Test ton; maiden wicket for Stuart Binny in 2nd Test at Colombo

Sri Lanka at stumps on Day Two were sitting comfortably at 140 for 3. India had taken out Dimuth Karunaratne early but the 74-run stand between Kumar Sangakkara and Kaushal Silva steadied them. Sangakkara was out for 32 in his penultimate Test innings. Silva fought hard for his ninth Test fifty but got out later in the day to Amit Mishra for 51. The Indian bowlers bowled tight lines and lengths and did not give much away to the hosts. Live cricket updates India vs Sri Lanka, 2nd Test at Colombo, Day 3

India were bowled out for a score of 393 on Day Two. It took a 164-run stand from Virat Kohli and KL Rahul to steady them after being rocked early by being 12 for 2 at one stage. Kohli missed out on his ton as he got out caught brilliantly by Angelo Mathews for 78. Rahul though ensured India did not lose the momentum and notched up his second Test hundred. India were in a spot of bother when they were reduced to 267 for 5 but Rohit Sharma’s 79 and Wriddhiman Saha‘s back-to-back fifties saw India through to a score of 393. Rangana Herath was again among the wickets taking four of them.

Earlier on Day One, India won the toss and elected to bat first. India made three changes with Shikhar Dhawan, Harbhajan Singh and Varun Aaron going out for Vijay, Binny and Yadav. Sri Lanka had a forced change to make, they replaced Nuwan Pradeep with Dushmantha Chameera. 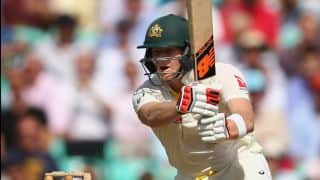