India scored 301 runs on Day Two and lost just one wicket, thus dominating Sri Lanka in the second Test at Nagpur. Indian bowlers excelled on the pitch with a green tinge on Friday, bundling the visitors for 205. Reduced to 11 for 1, Cheteshwar Pujara and Murali Vijay revived the hosts on Saturday, scoring centuries apiece. India reached 312 for 2 at stumps, leading Sri Lanka by 107 runs. At the crease are now skipper Virat Kohli (54*) along with Pujara (121*).

Dinesh Chandimal put a lot of faith on Lahiru Gamage and gave him many overs. He tried not to use Suranga Lakmal too much. However, the rest of the seamers were ineffective in most parts of the game barring the beginning of the second session. Pujara and Vijay put up a 90-run partnership in the first session. Vijay completed his half-century. India gathered 86 runs in the session without losing any wicket, thus owning the session entirely.

Sri Lanka’s wasted their chances as well. Observing that Vijay was trying to play lofted shots, Chandimal placed Diluwan Perera at short mid-on. Vijay did attempt a similar shot yet again but the ball deflected off Perera’s palms. Earlier, they missed a catch and run-out opportunity.

The following session, Pujara got to his half-century. The partnership looked indomitable. No attacking move came from Sri Lanka and rather they tried to stop runs, which provided the Indian batsmen with even more confidence. Meanwhile, one of Vijay’s sweeps injured Sadera Samarawickrama, who had to leave the field.

Vijay soon reached his century. This was his first against Sri Lanka, 10th of his Test career and the seventh in India. The second session also remained wicketless and India amassed 88 runs. Pujara inched towards his century.

Sri Lanka’s only success came in the final session. However, it was more of Vijay’s poor shot selection than any bowling brilliance from Sri Lanka. Rangana Herath bowled a lower full toss that Vijay tried to sweep. He failed to connect, and the ball took the top edge to land in the hands of a strategically placed short fine-leg fielder. The 209-run partnership came to an end; Vijay departed after a brilliant 128 that announced his comeback after his injury.

However, India’s run-feast did not stop. Vijay’s wicket brought Kohli into the field. Kohli took very little time to settle at the crease. Sri Lanka’s fielding remained poor as well and Kohli made full use of that, running for four runs in an over-throw.

Kohli kept on scoring quickly while Pujara got to his 16th Test century. Pujara thus equated his skipper, scoring his seventh century since 2016 second-most after Steven Smith. 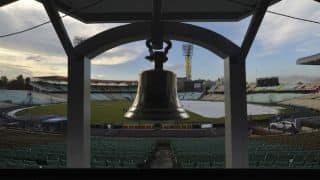 Cheteshwar Pujara, batting on all five days in Test and the unique Kolkata connection 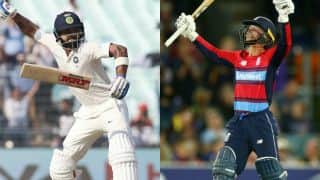