Sourav Ganguly refused to compare eras when asked to compare Sachin Tendulkar and Virat Kohli. Speaking at the launch of his book, A Century Is Not Enough, in New Delhi, Ganguly also marked that India were favourites for 2019 World Cup.

I don t believe in the word best as different teams play well under different situations but we have a side which is very strong.

We went to 2003 and 2007 World Cups as favourites, in 2011 we won and even now. It’s all because of the culture of Indian cricket and the quality which comes out every time which makes Indian cricket special, Ganguly said when asked about India s chances at the 2019 World Cup.

The Ganguly-led India finished runners-up in the 2003 edition, whereas they were forced to exit after round one in 2007.

Ganguly s former teammates, Virender Sehwag and Yuvraj Singh, were present at the occasion. They believed that India will come out victorious in the 2019 World Cup.

Ganguly has always maintained that his former teammate, Tendulkar, was his favourite cricketers. He has always been vocal about his support for Kohli too. Ganguly refused to compare the two.

We don t compare generations. Indian cricket is fortunate to see both of them.

Every generation has produced champions. When Gavaskar (Sunil) finished, people thought who would take his place and then Sachin came. Later Dravid (Rahul) followed Sachin and look we now have Kohli, said the 45-year-old. 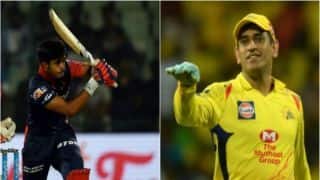