England captain Eoin Morgan won the toss and opted to bat first against India in Match 38 of the ICC Cricket World Cup 2019 at Edgbaston on Sunday.

England captain Eoin Morgan won the toss and opted to bat first against India in Match 38 of the ICC Cricket World Cup 2019 at Edgbaston on Sunday.

Both the teams have made changes to their respective playing XI. India have given world cup debut to the big-hitting Rishabh Pant who replaces allrounder Vijay Shankar who has a toe niggle. England have made two changes – one ‘tactical’ as they bring in Liam Plunkett in place of allrounder Moeen Ali. The bigger news for them is that opener Jason Roy has been deemed fully fit and comes back in place of James Vince

A win here will see India become the second team after Australia to make the world cup semi-finals.

“… honestly we would have batted first today. We haven’t chased after the first game in the tournament, so it’s a good challenge for us. We haven’t really focused on the opposition in this tournament, that’s why we have been consistent,” Kohli said at the toss.

Morgan said, “Two games to go, looking to win both and go through. Tactical move to bring in Plunkett in place of Moeen. There could be a bit more pace and bounce. Looks like the wicket will not offer much of turn, so we feel Liam will be more effective today.” 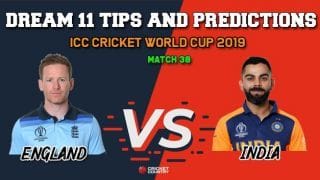