India has the best bowling attack in the world: Zaheer Khan

India has the best bowling attack in the world: Zaheer Khan

Zaheer is convinced that India is the best in the world as far as bowling attack is concerned.

India‘s emergence as a strong fast-bowling unit has left Zaheer Khan, the former left-arm pacer, impressed, to an extent that the 40-year-old is convinced that India the No.1 Test side in the the best in the world as far as bowling attack is concerned.

The impact of Jasprit Bumrah, fitness and precision of Mohammed Shami, accuracy of Bhuvneshwar Kumar, coupled by the wristspin of Kuldeep Yadav and Yuzvendra Chahal has put India’s bowling on the map. Bumrah is the No. 1 ODI bowler in the world, while Shami’s improved fitness level has upped his graph across formats.

Besides, Ishant Sharma is spearheading India’s fast bowling attack in Tests and Navdeep Saini’s encouraging start to international cricket promises a bright future ahead. All these are indications of Indian fast bowling’s great health.

“These are exciting times to be a fast bowler in India. The likes of Bumrah, Shami, Ishant, Bhuvneshwar Kumar and Navdeep Saini among others have proven the fact that the current Indian team is a powerhouse of bowling and it is by far the best bowling attack in the world. It feels fantastic as a fast bowler and I hope they keep putting in the hard work and maintain the rhythm which has seen them achieve results,” Zaheer told IANS on Saturday.

“The current pool of fast bowlers is the best India has ever had for sure. I feel India is already a side a watch out for in the world as far as fast bowling is concerned. I am looking forward to this series to see the kind of combination they go in with because generally you have seen two spinners being played even if there is help for the fast bowlers.

“Everyone (young bowlers) has their own style. Saini has impressed with his pace. I feel in the longer format he can have a great impact because of the consistency of length that he has shown. In the longer format I feel Saini will have more edge. Deepak Chahar has been very good with his swing. He is someone who has been using the outswingers to great effect. Chahar’s strength has been swing with the new ball while Saini’s strength is his pace and Khaleel Ahmed has been good with his variations.”

Zaheer came up with a special mention for Bumrah, whom he’s kept an eye on since his stint with Mumbai Indians. In terms of an Indian fast bowler rising rapidly, Bumrah is the first name that comes to mind. After a successful start to his limited-overs career, Bumrah has impressed even more in Tests since his debut against South Africa 2018.

In only 12 Tests, none of which has been played in India, Bumrah has picked up 62 wickets with five five-wicket-hauls and a hat-trick. His phenomenal rise has placed him third on the ICC rankings for Test bowlers.

“I have tracked Jasprit’s progress since a very young age. Since his early days with Mumbai Indians he was extremely talented and I am happy as to how over the years he has been able to nurture himself well and brought out some stellar performances for his team,” Zaheer said. “His awkward action has worked really well for him, I feel he just needs to keep working on his fitness and keep evolving without putting too much pressure on himself.”

India, under Virat Kohli, managed to reach the pinnacle the No. 1 ranking in Test cricket and Zaheer feels a lot of credit has to go to the India captain for the way he’s handled his resources especially the fast bowlers. One of the few to have played under Sourav Ganguly, MS Dhoni and Kohli for the Royal Challengers Bangalore, Zaheer sees one trait familiar between the current India captain and the one he made his debut under.

“Sourav made us believe that we can win oversees and inspired us to play with a lot of aggression. Dhoni was calm through tough situations, yet aggressive in his approach. We won the World Cup under him, so it was always very special playing under his leadership,” Zaheer reckoned.

“Virat is a lot like dada (Ganguly), he is expressive, bold in his decisions and always pumps the team up through crunch situations. His sublime batting form is always reflective of the way he leads the team on field. I wish to see him lift the World Cup for India one day.”

Zaheer weighed in on the topic of Rohit Sharma being tried out as an opener in Tests. Rohit was dismissed for a two-ball duck in his first outing as a Test opener during the warm-up game between the Board President’s XI and South Africa but Zaheer believes a player of Rohit’s quality becomes an automatic choice in the Playing XI.

“You can’t really keep a player of his calibre out of the playing XI, especially after the kind of form he has shown in the last six months. We will have to wait and see if he has the skills although I have no doubts,” he said. 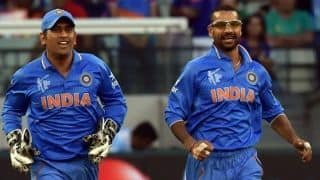