India, who have a poor ODI record in South Africa, is set for improvement after being 2-0 up in the six-match series.

Cape Town: Opener Shikhar Dhawan believes the Indian ODI team now has the right balance and x-factor to succeed anywhere, holding the number one side in good stead ahead of the 2019 World Cup in England. “We have a lot of experience. For instance this is my second tour to South Africa, so I was better equipped for this tour, mentally and skill-wise. That plays a big role,” said Dhawan ahead of the third ODI against South Africa tomorrow.

“The good thing is there s experience and youth, but the younger players are also playing like they have had a lot of experience. That is a big strength of ours.” And Hardik Pandya gives the team the extra edge. “With an all-rounder coming in, the balance overseas is set. We have the option of not introducing spinners early, depending on the situation. So we have a lot of flexibility.

If the game goes a certain way, we know that we can bring on spinners later than normal, and Hardik can bowl at that time. That is certainly an x-factor,” he added.

India, who have a poor ODI record in South Africa, is set for improvement after being 2-0 up in the six-match series. South Africa have struggled against the wrist spinners and injury to key players like Ab de Villiers, Faf du Plessis and Quinton de Kock has compounded their woes.

However, Dhawan promised that India will not take their foot off the pedal. “I don t think we guys are going to get complacent. It s a big series for us. And of course South Africa played very well in the Test series. So we d like to go as hard as possible and try to win whatever games come our way.”

Besides the injuries costing them, South Africa have been blown away by wrist spinners Yuzvendra Chahal and Kuldeep Yadav. The duo shared 13 wickets between them in the first two ODIS.

“It is difficult to play wrist-spinners because they can turn the ball on flat tracks also. And when the ball starts turning, the overseas players especially aren t very used to it. That can create doubts in batsmen s minds, which is why they are effective.

The opener added that South Africa have not scored enough runs in the series, and that the opposition now has a mental fear of wrist spin. So much so, the Proteas had quite a few local leg spinners in their nets on Tuesday ahead of the third ODI.

“I won t say it s a lack of patience. You re playing one-day cricket so you have to score some runs. If you defend 50 balls and don t score, then that s of no use. They are losing a lot of wickets in the middle, which is why they can t get to the targets they are trying to make,” said the opener.

“If you have some confusion or doubt in your mind, its first effect is on your thinking. No matter who the batsman, and then it shows in your batting. If they can t read our spinners, then of course they ll be more cautious while playing them. We do get an advantage from that.”

Dhawan played the first Test here at Cape Town, but didn t feature at Centurion or Johannesburg. Since then, he has made a fine return to the ODI side with scores of 35 and 51 not out.

He had looked good in Durban before being run-out in a mix-up with Virat Kohli.

“My form was going good. Even when I wasn t playing, I was batting like this. The only thing is when I was not playing I worked harder, made myself fitter as I had time on my hands. I knew what I needed to work on and what challenges I could face here, what their bowlers will do against me to get me out. I m just enjoying my process, said Dhawan.

India are set to retain the same playing eleven in the third ODI, with Rohit Sharma s form the only cause for concern. The three-time ODI double centurion averages only 13.44 in 10 ODIs on South African soil.

“I feel Rohit is playing amazingly. The way he s timing the ball has been amazing. Even in the last match he was playing very well, but unfortunately he got out. I don t see any concerns with his batting.

“The key for our success is we are not losing wickets on top. Of course the South African fast bowling is very strong, but we are playing them nicely. And once we cross the first 10 overs, the ball gets a bit older and we dominate more after that,” he added.

The Newlands pitch for this third ODI didn t appear to be as dry as the ones at Durban and Centurion. It looked a typical South African batting wicket with plenty of bounce.

“We all know that there is a drought here and we respect that. We are aware that we have to save as much water as we can, because people need it. We respect that,” Dhawan said, talking about the water restrictions faced by the Indian team during their stay in Cape Town. 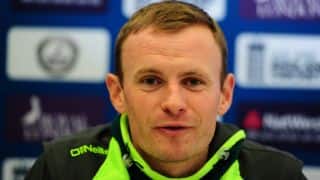